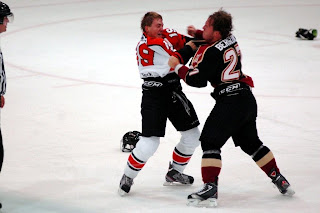 Krause opened the scoring early in the second period on a quick centring pass from Seb Lloyd, before Trail's Brandon Egli replied on the power-play just over two minutes later on a sharp wrister from the point.

But the Smokies battled back. Clayton Chessa snuck a shot just over the Westside goal-line and Kyle Horsman added his first BCHL goal moments later before a pair of penalties swung the momentum in the Warriors' favour.

With Logan Proulx already in the box for boarding, rookie Adam Wheeldon was ejected for a check from behind on Warriors defenseman Brayden Sherbinin. Krause converted a pretty pass from Michael King just as Proulx stepped out of the penalty box before completing his hat-trick on a turnaround slapper in the final minutes of the third.

Despite the scoreline, there were positives from Trail's game tonight. The Smokies created several odd-man rushes (including a Josh Roberts breakaway that struck iron), and several young forwards including Luke Bertolucci had strong games. You could tell right from the start that nerves were in play tonight both on the ice and in the booth, but the Smokies settled down and benefitted I thought from a scoreless opening twenty minutes before some untimely goals set them back. You can be sure Trail will be ready for the second half of the weekend double-header.

My Three Stars: Krause was an obvious choice, given the hat-trick. He and my second star Lloyd were dangerous all night and capitalized when the Warriors needed it most. Captain Izaak Berglund logged a ton of minutes (save when he was serving a fighting major after a set-to with Chessa) and anchored a steady, sizeable Westside back end.

Did You See: The Warriors played most of the third period without head coach Rylan Ferster. He was ejected at the 4:47 mark by referee Grant Tyson after Krause was called for a slash.

Up Next: The Smokies and Warriors renew hostilities tomorrow night at the Cominco Arena. Faceoff is set for 7:30.

KIJHL Tonight: Phil Bamber scored the OT winner for Kelowna as they edged Nelson 4-3. Former Leaf Braeden Hikichi added a pair for the Chiefs. Anthony DeLong scored 5 points (1-4) in a 9-2 Rebels win at Grand Forks, while Ryan Edwards had a goal and two assists as Beaver Valley spoiled Spokane's home opener with a 7-2 win.
Posted by Chris Wahl at 10:58 PM