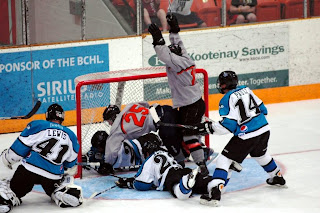 A third-period comeback fell just short this afternoon as the Wenatchee Wild edged the Smoke Eaters 3-2 in pre-season action at Cominco Arena.

Wenatchee jumped out to a 2-0 lead before the game was nine minutes old on goals by Shawn Pauly and Kyle Huson, outshooting the Smokies 15-7 in the opening frame.

But Trail found the back of the net for the first time in the tournament in the second. Josh Roberts capped off a wild scramble in the Wild goalmouth on a Trail power-play to cut the lead in half.

Wenatchee would find a winner, though, in the third period, as Air Force commit Ben Carey wired a snapshot over the shoulder of Smokies goaltender Matt Larose with just over six minutes remaining in the final stanza.

Calgarian J.J. Beitel floated home a long wrister of his own through traffic 3:50 after Carey's goal to complete the scoring.

Greg Lewis made 20 saves for Wenatchee while Larose stopped 35 of 38 Wild shots.

After three games, it's evident this year's Smokies are a work in progress. The penalty-kill was much improved today, denying the Wild on all six opportunities they enjoyed this afternoon. Even though Trail's shot total decreased with each game played (to a tourney-low 22 today), the club still dressed 12 rookies. Smokies assistant Bob Dever told me after the game the club's next week of practice will have an emphasis on systems, and once the main squad becomes more familiar with each other (let's not forget, more than half of the club's 21-man roster this season will be new to Trail), I'm sure the communication and execution will round into form.

Up Next: The Smokies play only once over the next 13 days, that being an exhibition tilt Friday night in Salmon Arm. Their next home game is the newly-announced matchup with Thompson Rivers University on September 17th. As I've stated before, more details will be available on that game in the next few days.

Out Of Town: The early game today featured Powell River pick up their second straight shutout of the tourney, defeating Brooks 3-0.

Dixon Out: I received word yesterday that returning Smoke Eaters defenseman Ryan Dixon has elected to leave the team in order to focus on his studies. I'm told the 17 year-old has educational aspirations that may not have been conducive to the demands placed on him by life in the BCHL, and that he is likely to return to the Beaver Valley Nitehawks, with whom he spent half of last season. Everyone I've spoken to with the club is fully supportive of Ryan's decision and although I've never had the chance to meet/interview him during my time here thus far, I too wish him all the best.