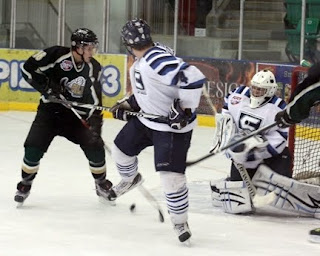 New Smokies goaltender James D'Andrea makes a save while with the AJHL's Calgary Canucks last season (photo Cole Christensen, Okotoks Western Wheel)
As alluded to yesterday, I chatted with Smokies head coach Bill Birks about the trades that see four new faces arrive in Trail's camp. To recap, the Smoke Eaters acquired goaltender James D'Andrea from AJHL Drumheller in exchange for defenseman Rajan Sidhu, as well as blueliners Tanner Hicks and Marley Keca and forward Taylor House for goaltender Matt Larose, defenseman Daniel DelBianco (and, according to this, the rights to former Smokies d-man Eric Walker who is studying at Northern Michigan University).

To listen to my conversation with Birks, click here.

To get back to the league-mandated 21-man roster, the Smoke Eaters have released forward Matt Bissett to the PIJHL's Ridge Meadows Flames. The 17 year-old put up two assists in 10 games in Trail, and coach Birks says he will get a lot more icetime with the Flames as well as play closer to his Pitt Meadows home.

According to the Smokies roster page, Bissett's #18 sweater has been assigned to House, while Hicks will wear #2, and Keca #7. I'll try to get some audio from the new players after practice today.

Local Hockey Tonight: Another three-game-in-three-day weekend begins in Fernie tonight (6:30 PT, Memorial Arena) for the Castlegar Rebels. I caught up with head coach Steve Junker this morning, hear his thoughts here. The Border Bruins host the Columbia Valley Rockies tonight in the other local KIJHL game (7:30, Grand Forks Arena). Selkirk College is back on home ice tonight as well against former Nitehawk Layne Stopanski and the Okanagan College Coyotes (7:30, Complex).
Posted by Chris Wahl at 12:08 PM

4-1 Alberni win over PR in Larose's first game. 1st star and 96.5 save %. Seems that maybe Birks was wrong in blaming all of the team's troubles on Matty.

A great moment for Matt to be sure, but I can't help thinking that one game is an awfully small sample size to properly evaluate this trade.

If one was to go with that logic then would the Smokies' win over Penticton mean nothing either?

I just think it's sad that a coach would go so far as to completely trash a single player in an interview (before the PG game). Especially when they did extremely well the year before (rookie of the year for the Smokies), and was invited to the Can West camp (did well there too). It just doesn't seem likely that he was the cause of all Trail's problems. Seems more like a scapegoat.

Basically, it's just very disturbing to hear a coach tear apart any player in a public interview. A team is a team and no matter what is said in the privacy of the locker-room, they should present a united front to the public. Maybe I'm old-fashioned that way.

The Penticton game was a great moment, and Trail almost had another Saturday against Vernon. Yes a small sample size, and we'll have to wait and see whether it turns out to be a building block for this group, but definitely a much-needed positive for the collective psyche.

This isn't the first time I've been asked about this particular interview (unless you are the same person as the one who tweeted me last weekend). I didn't conduct it (as you well know), and I'm not going to press on what the coach told Prince George's broadcaster because it's not my place. As for unity in the dressing room, I think the coaching staff hold a high standard for his team and both Bill Birks and Bob Dever have made no bones about telling me, on the record, that they have on occasion expected better from members of this team.

I have absolutely nothing against Matt Larose. I've never interviewed him, but from the periphery he seems like a great young man, and has certainly gotten off to a great start with the Bulldogs. I wish him nothing but the best (and tongue in cheek hope Max Fenkell gets the start here February 2nd).

I appreciate the time you've taken to comment and hope you'll continue to do so in the future.