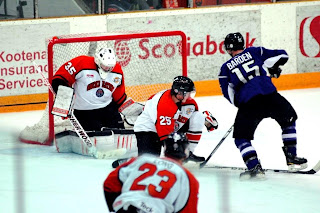 Muller put successive backhands past Smokies goaltender Matt Larose for his second and third goals of the season.

Despite conceding an early goal to Silverbacks forward Brock Balson, the Smokies led 2-1 through 20 minutes thanks to tallies from Brent Baltus and Clayton Chessa.

But Salmon Arm stormed back in the middle frame, snatching the lead on goals by Alex Gillies and Brett Knowles before the second period was three minutes old.

Trail battled back in period three, thanks in part to a goal and an assist from defenceman Nicholas Wong, but 'Backs goaltender Kurt Williams made 29 saves to earn his (and Salmon Arm's) first victory of the season in the first half of the home-and-home set.

Newcomer Adam Fares made an instant impression, scrapping with Silverbacks d-man James Friedel after Friedel took exception to a hit Fares made on forward Kody Dhaliwal. The 18 year-old from Thunder Bay opened his Smokies scoring account in the third period, smartly tipping home a Wong point shot to bring Trail back within 2 goals.

Advantage, Salmon Arm through the first half of the weekend home-and-home set. If not for the second-period offensive outburst from the 'Backs, tonight's game might well have gone Trail's way. We'll see tomorrow night if Trail can return the favour at the Sunwave Centre.

Did You See: Smokies d-man Clayton McEwan took a Knowles shoulder to the head midway through the third period while leading a rush into the Salmon Arm zone. McEwan finished the game, Knowles was not penalized, and after the game the Trail defenceman had a noticeable mark on his right cheek.

Up Next: As alluded to, the two sides will be back at it tomorrow night in Salmon Arm. Catch my broadcast on Ustream (link provided tomorrow) or check out new Silverback broadcaster Scott Campbell's call on the pay-per-view.

KIJHL Tonight: All four of our local junior "B" teams were on home ice tonight. Nelson rode two goals from Brett Norman to edge Kimberley 4-3, while in Fruitvale, the Nitehawks used a three-point night from Dallas Calvin to their advantage in a 5-4 win over Creston Valley. Spokane's Zak Kroll tallied in overtime to lift the Braves over the Castlegar Rebels 4-3, while Osoyoos scored 6 times in the first period en route to a 10-0 shutout at Grand Forks.

Local Look-See: Former Castlegar Rebel Erik Wentzel shot me a tweet today to let me know about his Adrian College (MI) Bulldogs' appearance at the ACHA Division 1 showcase this weekend. Wentzel, who took in two stints with the Rebels including a leading role on last year's Kootenay Conference championship club, has put up 2-1-3 in 4 games thus far, and leads the Bulldogs with 33 penalty minutes.
Posted by Chris Wahl at 11:53 PM