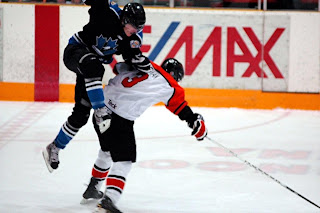 Smokies blueliner Clayton McEwan upends a Vee during Wednesday's game at the Cominco Arena (Randy Emery photo)
Adam Boytinck broke a 2-2 tie five minutes into the second period, and the Smoke Eaters hung on for a 4-3 victory over the Penticton Vees at Cominco Arena.

Boytinck whistled a wrist shot past Vees goaltender Chad Katunar from the right-wing circle, after Connor Reilly's second goal of the game had leveled the score late in the first period.

Reilly opened the scoring early on during a Penticton power-play, converting a centring pass from Travis St. Denis. But just over a minute later, Smokies forward Josh Roberts backhanded home his first BCHL goal to even things at one, before a Tim Coish point shot gave Trail a short-lived first period lead.

After Boytinck's tally, the Smokies extended their lead to 4-2 thanks to blueliner Rajan Sidhu's first goal of the season, before former Smokie St. Denis tipped home his first goal as a visitor to Cominco Arena to round out the scoring before 40 minutes were through.

That's not to say there weren't chances in the final frame, though.

Smokies goaltender Reed Vogt made several point-blank saves, from a first-period breakaway by Vees captain Joey Benik to a deflection off a teammate's kneecap late in the third period, stopping 28 Penticton shots in all to record a much-deserved first BCHL victory.

Tonight's game was a perfect example of what Trail is capable of when they work hard. After the game head coach Bill Birks told me his side did everything the coaching staff asked, and broke the game down into 5-minute segments to try to avoid mental lapses that, to this point in the season, have proved costly at times. I'll post that audio along with Boytinck and Vogt's thoughts tomorrow.

Up Next: It doesn't get any easier for the Smokies, with the three-time defending BCHL champion Vernon Vipers paying their first visit to the Cominco Arena Saturday night, game time is 7:30.

Techno-Illogical: Those of you tuning into the pay-per-view may have noticed Vees play-caller Fraser Rodgers behind the mic tonight. That's because of some technical misgivings in the Cominco Arena booth that, regrettably, prevented the Vees' broadcast from being transmitted to the South Okanagan. All stress aside, I'm glad everything (sort of) ended up working out on his end this evening and that Penticton fans were able to hear the game.

KIJHL Tonight: Max Mois split a 3-3 tie to help Nelson past the Beaver Valley Nitehawks 5-3 at the NDCC. Leafs forward Patrick Martens scored twice, as did Nitehawk winger Tyler Collins. The Leafs now sit five points clear of BV in the Neil Murdoch division, with a busy weekend ahead for all of our local teams.
Posted by Chris Wahl at 11:01 PM