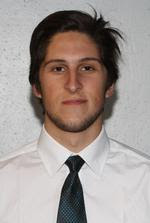 I've spoken with head coach/GM Bill Birks about the trade, he says Fares' size will suit him well in some of the smaller buildings in the BCHL (including the Cominco Arena) and that he's excited to join the Smoke Eaters. It's his expectation that Fares will take part in this weekend's home and home series against Salmon Arm (I'll have the call of both games for you here). My conversation with Birks will be posted here tomorrow once it's aired on Mountain FM.

Fares will wear #20 with the Smoke Eaters.

Welcome to Trail Adam!
Posted by Chris Wahl at 5:22 PM