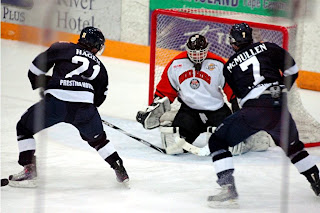 Nowick converted a Colton Sparrow feed from behind the net for his first of two goals as Vernon's three-game losing streak came to an end.

But despite the 6-3 score, tonight's game was up for grabs until the dying moments.

Adam Boytinck tipped home a point shot 4:54 into the first period on a Smokies power-play to give Trail an early lead, which was wiped out after Alex Hagen drifted a wrister into the top corner just over two minutes later. Trail would add a second tally before the opening frame elapsed thanks to Clayton Chessa, who tapped home a sharp cross-crease pass past Vipers goaltender Danny Todosychuk.

Vernon would take advantage of Trail's lively boards with their second equalizer, though. Sparrow launched a wrist shot past Smokies goaltender Reed Vogt after retrieving a hefty bounce from the end boards after a Ryan Renz point shot missed the net.

Trail's Luke Bertolucci restored the home team's one-goal advantage, again on the power-play as he lifted a sharp-angle backhand shot over Todosychuk's shoulder 3:13 after Sparrow's tally. But Adam Tambellini would count the first of his two goals before the second period was finished, finishing off a Sparrow pass from the low slot.

After a third period that saw both teams trade chances but Vernon enjoy most of the possession, Nowick broke the 3-3 tie before Tambellini and Nowick again (this time into an empty net) rounded out the scoring.

Up Next: The Smokies hit the road for three games next weekend in Chilliwack, Powell River and Cowichan Valley. I'm still firming up my travel plans but fully expect to carry all three games on the Smokies' Ustream channel.