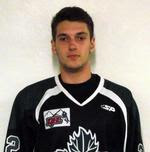 The Nelson Leafs were busy over the weekend not only on the ice, but off it.

Nelson made two separate deals with Eddie Mountain divison clubs that see two blueliners leave, and one forward return to the West Kootenay.

First, the Leafs sent Californian rearguard Taylor Carriveau to the Fernie Ghostriders in a futures deal. Carriveau played both weekend games with the Ghostriders, and recorded five assists during his time in Nelson.

Next, Nelson traded defenseman Riley Henderson (pictured) to the Golden Rockets for forward Marc Lepine. The Richmond product was in his second season in Nelson after putting up 26 points last year; he'd already recorded 15 (3-12) this year despite missing time with an injury.

In return, the Leafs snag a fellow nineteen year-old in Lepine, who has scored only two goals thus far this season but brings plenty of grit, according to Leafs bench boss Frank Maida. The Edmonton native was in his second season with Golden.

It's no surprise to see defensemen leaving the Leafs in advance of the December 1st carding deadline. With new acquisitions J.J. Beitel and Eric Spring thriving in green and white, something had to give with no fewer than nine blueliners on the Leafs' active roster as of Friday. It's just as important for Nelson to add a role player or two that can provide some sandpaper on the third and fourth lines, and in Lepine, the Leafs appear to have found their man.

Our team at Mountain FM and 103.5 the Bridge caught up with coach Maida this afternoon, hear his thoughts on tomorrow's morning news.
Posted by Chris Wahl at 8:26 PM