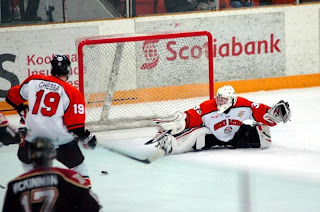 Trail goaltender Lyndon Stanwood kicks out a save (Randy Emery photo)
Just what the doctor ordered for the Smokies, and the more than 1,100 fans who turned up at Cominco Arena Saturday.

Connor Tiechko scored twice, and Lyndon Stanwood stopped 33 of 34 shots as Trail rode the strength of its power-play in a 3-1 home win over the Westside Warriors.

All three Smokies goals were scored on the man advantage, with Tiechko's pair coming on two separate 5-on-3 power-plays.

As was the case last night, things didn't get started offensively until the middle frame, when a blast from Tanner Hicks wound up in the top left-hand corner of the Warrior goal.

The scoreline would hold true until the third, when Tiechko poked home a loose puck in the Warrior crease for his (like Hicks) second goal as a Smoke Eater. The Chilliwack native would add a third for Trail minutes later from the low slot on a pretty feed from Garrett McMullen.

Westside's Tyler Krause put his squad on the board in the final three minutes, outwaiting Stanwood on a rebound as he skated across the crease for his fifth goal against Trail this season.

Stanwood, for lack of a better term, was remarkable. As was the case last night in West Kelowna, the former Hollyburn product made several stops bordering on the acrobatic, and showed plenty of poise between the pipes in front of the largest (and most vocal) Smoke Eaters home crowd of the season. Safe to say the newcomer has left a lasting impression on everyone who was in the building tonight.

That's not to take anything away from the performance of Dwayne Rodrigue of the Warriors. He robbed Erik Cooper on a cross-ice one-timer attempt late in the first period, and was solid yet again for Westside, though he faced a much tougher test from his Trail opposition than at Royal Lepage Place a night ago.

Up Next: The Smokies look to make it two in a row Wednesday when they host the Merritt Centennials. Trail has taken 3 of 4 points this year from a Merritt squad that sits alone in second place in the Interior Conference.

Local Hockey Tonight: Lots of action in the KIJHL, including a 9-3 Castlegar victory against the Summerland Steam. Scott Morisseau scored three goals for the Rebels. Nelson doubled Spokane 4-2 at the NDCC thanks to a hat-trick from Nik Newman. Grand Forks lost 9-1 in Fernie, while Beaver Valley defeated Columbia Valley 9-3. The major midget Kootenay Ice were edged 5-4 in Langley by the Valley West Hawks, and Okanagan College won at home over the Selkirk Saints, 6-3.

Local Look-See: Trail's Craig Cunningham had a goal for Providence (AHL) in a 3-2 setback at Norfolk, while former Nitehawks Ryon Sookro and Zak Majkowski each tallied as the Yorkton Terriers (SJHL) won 5-1 at home over Melville. Trail's Steve Koshey also had the OT winner as the Surrey Eagles beat Powell River 4-3 in other BCHL action tonight.
Posted by Chris Wahl at 11:06 PM

Well written blog Chris, especially for those of us not in attendance. We appreciate the details and accuracy. Way to go Smokies and welcome Lyndon!