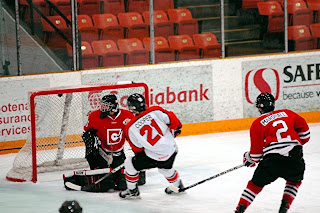 Make it two in a row for the Smokies!

Marley Keca scored the eventual game-winner in the third period, while Lyndon Stanwood made 42 saves as Trail edged Merritt 4-3 at the Cominco Arena.

Erik Cooper (pictured above) opened things up just shy of the 8-minute mark when he roofed a short-handed breakaway over Centennials goaltender Tyler Steel. Connor Tiechko added a second breakaway marker (this time at even strength) minutes later to give the Smokies a 2-0 lead heading into the first intermission.

The two teams would trade goals early in the second, Merritt's off an Evan Stack deflection on an early-period power-play, Trail's by Garrett McMullen, who banged a rebound through a crowd of players to restore the two-goal advantage.

A Richard Sabourin point shot caught everyone on the ice by surprise to round out the second-period summary. Sabourin directed a slapper from the left point which went into the top of the Trail net through a maze of bodies.

That set the stage for Keca's goal in the third. The defenseman took the puck out of the left-wing corner and drove hard to the net, beating Steel for his third goal of the season.

Dustin Lebrun put home a wrister from the slot just under five minutes later, but with 7:10, remaining in the period, Smokies AP Craig Martin was hauled down on a breakaway, resulting in a penalty shot.

Steel outwaited the 16 year-old, going left to right and making a fine pad save to keep the scoreline at 4-3.

The rest of the game was up to Stanwood. He made several key saves right up until the dying seconds to preserve the victory for the Smoke Eaters, who improve to 2-0-1 against the Cents this season.

Once again, Trail showed rarely-before-seen confidence on the ice, and although Merritt tried to claw their way back after falling behind early, the Smokies denied them a much-pressed-for equalizer. Keca was particularly strong on the back end, while the line of Cooper, Tiechko and McMullen (thrown together after Clayton Chessa was scratched) were magnificent.

Although he failed to register a point, Luke Bertolucci had a particularly strong game for Trail, carrying the puck into the dirty areas of the ice and generating several scoring opportunities on a line with Martin and Brandon Long. Safe to say the 16 year-old is beginning to find his offensive flair at the junior "A" level.

Without Team Canada West member Reece Willcox, the Cents defense were stretched at times, but I thought rookie Tyler Martin showed a fair amount of poise on the back end for Merritt, logging a lot of minutes and continually making sure pucks made their way out of the defensive zone. Steel was also good in goal after giving up the two early breakaways. His stop on Martin's penalty shot was, at that point, a game-saver.

Up Next: Trail begins a weekend two-pack with the Chilliwack Chiefs at the Cominco Arena. I don't envy the Chiefs for their travel schedule this week; Chilliwack played (and won by the way) in Prince George against the Spruce Kings tonight.

December First Madness?: It remains to be seen what will happen tomorrow with the carding cutdown. I'm sure all five of our local junior "A" and "B" teams will be testing the market, but at least two coaches have told me the deals could well be few and far between. Like those of you reading, I'll believe it when I see it, as always stay tuned here and to Mountain FM/103.5 the Bridge for the latest breaking sports news out of our area, both from the BCHL and KIJHL.
Posted by Chris Wahl at 11:16 PM