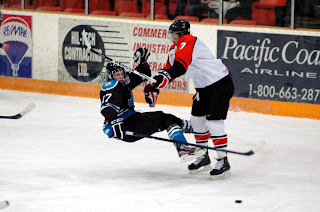 Clayton Chessa and Connor Tiechko scored for Trail, who lost for the first time in regulation at home to the Vees since November of 2009.

After Benik and Chessa exchanged special-teams markers (Benik's a short-handed breakaway, Chessa's through a screen on a Trail power-play), Reilly, Gropp and McCallum all scored within a period of 3:10, chasing Smokies starting goaltender Reed Vogt.

A Fogarty shot from the right circle and a pretty Benik tally on a give and go with Connor Reilly rounded out a busy first period that saw a frustrated Smokies side outshot 17-5. A Ryan Reilly wrister from the slot served as the only second-period goal, while Tiechko's backhander (his first goal as a Smoke Eater) completed the scoring for the evening.

Trail did well on special teams tonight, preventing the Vees from scoring on four power-plays while converting on two of their own opportunities and maintaining possession on the others. Penticton's penalty-kill was far from aggressive tonight, though the Vees (particularly the likes of Zach Urban and Kyle Beaulieu) did a good job getting in front of Trail shots. I liked what 16 year-old AP Dane Birks brought to the table on the defensive end. He positioned himself well, played a physical game and didn't seem overly overwhelmed by the prospect of facing one of Canada's best Junior "A" teams. Tiechko showed a lot of pace up front, moreso after his goal.

Outside of a first period dominated by Penticton, the Smoke Eaters held their own against the Vees. Penticton was missing 7 players and had six affiliates in the lineup, but the likes of Gropp, McCallum, Dexter Dancs, Zach Lindsay, Cam Marks and Alex Jewell showed they can play at this level, and didn't detract from the Vees' ability to move the puck efficiently, even if the intensity in tonight's game dropped off by a country mile by the time the scoreline was out of reach. No question the Smokies are frustrated after a second successive blowout loss, and will need to regroup ahead of another challenge Saturday at home.

Lest We Forget: As part of Remembrance Day commemorations, the 44th Field Squadron and Trail chapter of the Royal Canadian Legion put on a classy show of colours prior to puck drop tonight, including a ceremonial faceoff between Benik and Trail's captain Clayton McEwan. A classy moment to be sure, and a reminder that the freedoms enjoyed today came at a great cost.

Up Next: Trail returns to Cominco Arena ice for a date with the Vernon Vipers Saturday (7:30, Cominco Arena). Vernon leads the season series 2-0 after a pair of wins in Trail by scores of 6-3 and 4-2, and have been idle since a victory over Westside Tuesday.

Local Hockey Tonight: Both local KIJHL teams in action Friday were winners away from home. Tyler Collins scored twice in a 6-3 Beaver Valley victory at Penticton, while the Castlegar Rebels scored 4 unanswered goals in a 4-1 win at Princeton. Castlegar's Aaron Hadley scored once in Team Canada West's 2-1 overtime victory over Sweden in the semi-final of the World Junior "A" Challenge in Langley. Canada West goes up against Canada East in Sunday's final.
Posted by Chris Wahl at 11:03 PM