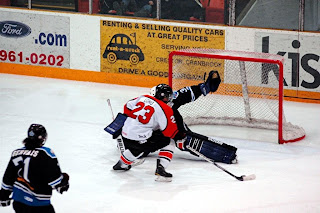 Smokies forward Brandon Long prepares to put home his first BCHL goal (Randy Emery photo)
A quick write-up tonight after a long day of hockey both in Trail and Fruitvale.

A first and third period to remember, a second period to forget, as the Smokies dropped their fifth straight this afternoon with an 8-5 setback against Penticton.

After Clayton Chessa put Trail ahead in the first period, the Vees took the middle frame by storm, putting a half-dozen goals (including a pair from newcomer Bryce Gervais) past Smokies goaltender James D'Andrea.

But despite trailing 6-1 after two periods, Trail battled back into the game courtesy Tanner Hicks, Brandon Long and Garrett McMullen, before a pair of goals within a half-minute of the sponsor timeout (including a second from Steven Fogarty) restored a four-goal advantage for the visitors.

Taylor House would deflect home a point shot moments later to round out the scoring.

There were bright moments, to be sure. The first period was fast-paced and evenly played, and I thought the Smokies were the more physical team in the third as well. The difference today? A second period that saw Penticton assert the game physically and mentally, starting with the two early goals from Connor Reilly and Gervais that put the Smoke Eaters behind the eight-ball inside of two minutes.

Up Next: The Smokies could have some healthy faces back in the lineup when they and the Westside Warriors help celebrate the BCHL's 50th anniversary with a home-and-home set beginning Friday in West Kelowna. Join me for that game on ustream.

KIJHL Today: A spirited affair tonight in Fruitvale as the Nitehawks came from behind to defeat Nelson 5-3. After the Leafs jumped out to a 2-0 lead early, the Hawks got a late third-period winner from Max Flanagan. Castlegar edged Penticton at home 3-2 (Anthony Delong scoring a late second-period winner), and Spokane upended Grand Forks 8-4.
Posted by Chris Wahl at 9:54 PM