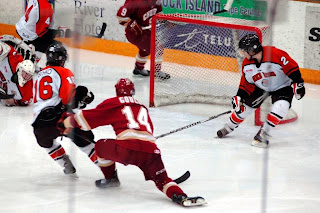 Chilliwack's Malcolm Gould has his shot deflected away by Smokies defenseman Tanner Hicks (2) during third period action Saturday (Randy Emery photo)
Josh Hansen snuck a backhander through the legs of Smokies goaltender Lyndon Stanwood late in the second period to give the Chilliwack Chiefs the only lead they'd need in a 2-1 win at Cominco Arena.

Hansen charged through the neutral zone and received an entry feed from Mathieu Tibbet, allowing him to break in alone and tuck home his second goal of the weekend.

Trail opened the scoring on an oddball goal midway through period one. A Brent Baltus wrister was bobbled by Chiefs goaltender Bryton Udy from glove to glove, before it bounced into the net off the forehead of Smokies captain Clayton McEwan.

Chilliwack tied the game later in the frame after Malcolm Gould was sprung in alone by David Bondra, allowing him to slip a forehand shot behind Stanwood.

After Friday night's game that saw a number of heavy (and some illegal) hits, Saturday's affair was relatively tame. The teams combined for only four penalties tonight (three by Chilliwack), and the big hits were few and far between.

Trail's effort was better than Friday night, as for the sixth straight game the Smoke Eaters opened the scoring, but had difficulty penetrating a stingy Chilliwack defense. Udy wasn't forced to be especially spectacular tonight, with most of the Smokies' success on the weekend coming from hard work below the goal-line and in the corners.

It was a bit disappointing not to see new acquisition Tanner Clarkson in the lineup for Trail this weekend. The 18 year-old was traded to the Smokies earlier this week, but did not suit up for either game against the Chiefs. Trail was also missing forward Adam Wheeldon who was slapped with a two-game suspension for a check on Chiefs forward Alex Perron-Fontaine in the second period of Friday's game. Chiefs forward Trevor Hills was given a similar ban for a check to the head major incurred Friday.

Up Next: The Smokies play the first of four straight away from home Thursday when they visit Vernon.

Local Hockey Tonight: Diego Bartlett scored the tying goal with 1:36 to play as Castlegar and Golden skated to a 2-2 saw-off in the KIJHL. Former Rebels AP goaltender Jarrod Schamerhorn made 38 saves for the Rockets. Christian Johnson had four goals for Beaver Valley in a 7-1 drubbing of the Fernie Ghostriders. The major midget Kootenay Ice got a pair of goals from Jake Lucchini but fell 6-3 to the Greater Vancouver Canadians (those two squads play a breakfast special at 9:30 tomorrow morning in Castlegar). Selkirk College lost 12-2 at Thompson Rivers University.
Posted by Chris Wahl at 11:00 PM