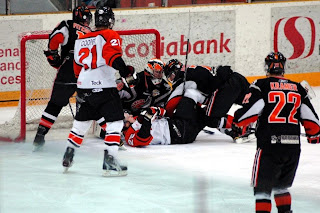 Another tough outing for the Smoke Eaters as they wind up the pre-holiday break portion of the schedule.

After a scoreless first period that saw few grade-A chances from either side, Dan Correale broke a 0-0 deadlock early in period two. The 20 year-old darted down the right wing before stopping at the top of the circle and slotting home his first goal of the season while short-handed.

Ryan Wells scored on a wrap-around later in the frame, before Mike Sones, and a pair from Andrew Gladiuk rounded things out at the Cominco Arena.

Trail started slowly (leading to a time-out just 2:20 into the first period) and never seemed to get the breakthrough they needed to take an early lead or climb back into proceedings once they fell behind. The line of Garrett McMullen, Connor Tiechko and AP Craig Martin had the most jump for the Smoke Eaters, while the likes of Adam Wheeldon and former Clipper Tanner Clarkson did well to provide a bit of energy as well.

The Clippers seemed to be constantly looking for long, stretch passes, and frequently had forwards waiting at the Trail blue line for feeds (aerial or otherwise). Two of the goals (Correale and Gladiuk's first) were a direct result of this strategy.

For the Smoke Eaters, who were missing five regulars with various knocks, the 12-day break should provide some opportunity to heal, both physically and mentally. Speaking with one player after the game I get the sense the team is looking forward to some time to recharge their batteries, and to come back in the new year with the goal of playing .500 hockey over the final 28 games of the regular season.

Up Next: The Smokies will enjoy a five-game homestand over the first half of January, but not before a trip to Prince George December 30th.