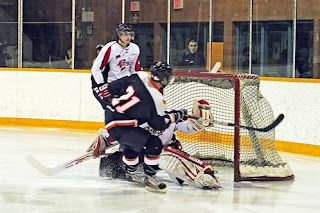 Beaver Valley forward Chris Derochie has been named the KIJHL's Kootenay Conference Player of the Month for November.
The 19 year-old from Rossland put up 21 points (10-11) last month, helping the 'Hawks to a five-point advantage atop the Neil Murdoch division. Through 28 games he sits second in the league in scoring with 59 points, two behind linemate Ryan Edwards.
He's also appeared in two games in the BCHL this year as an affiliate with the Vernon Vipers.
"Chris has been one of the KIJHL's best all-round players for the past couple of years, and is enjoying a breakout offensive season as one of the top scorers in the league," said head coach/GM Terry Jones.
Derochie is the third Neil Murdoch division player to win monthly honours this season, joining Anthony Delong (Castlegar) and Patrick Martens (Nelson).
The 'Hawks are back on home ice Friday against Spokane.
Congrats Chris!
Posted by Chris Wahl at 10:19 AM