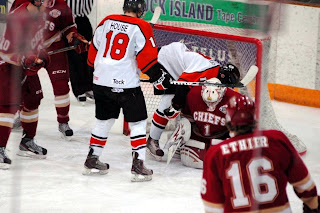 The Smokies go for a weekend split tonight against the Chiefs after a third-period offensive explosion helped Chilliwack to a 6-3 victory Friday.

At one point, the Smoke Eaters enjoyed a 2-0 lead thanks to rebound goals by Erik Cooper and Taylor House, but a workmanlike penalty-kill and a pair of odd-man rushes in quick succession split the game wide open in the visitors' favour.

Last Meeting: Not much to go over here, a Derek Huisman hat-trick and 36 saves from Mitch Gillam helped the Chiefs to their second straight win over Trail, 6-3 last night.

Our Opponent: Last night's game showed the importance of Chilliwack's top line (Huisman, Malcolm Gould and David Bondra), but I was also impressed by former Nelson Leaf Michael Spring, who scored the go-ahead goal on a two-on-one. Chilliwack's defense is big. The likes of Matthew Hutchinson, David Thompson and captain Tyler Miller prevented any easy access to the slot, with plenty of active sticks and blocked shots.

In the Press Box: As was the case last night, Brandon Egli, Adam Fares and Josh Roberts are all in sick bay tonight for Trail. Chilliwack defenseman Alex Perron-Fontaine went down with an injury in the second period after a big collision in the corner, and did not return.

Broadcast Info: Join me once again for the pay-per-view tonight beginning at 7:30. Chilliwack's crew has the call on 89.5 the Hawk.

Local Hockey Tonight: A doozy on tap in Fruitvale tonight. The Nitehawks edged Fernie 6-5 in overtime last night (Chris Derochie with the winner), the two sides meet again at the Beaver Valley Arena (7:30 faceoff), with a fan celebration set for the Fruitvale Pub following the game. Castlegar faces off against the Golden Rockets (7:30, Complex) in the only other KIJHL game involving local teams. The Complex is set for a double-header though, with the major midget Kootenay Ice taking on the Greater Vancouver Canadians at 4:00. Selkirk College opens a weekend double-header at Thompson Rivers University tonight.
Posted by Chris Wahl at 12:53 PM