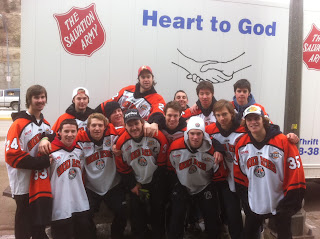 Lots to talk about in advance of the final weekend of the pre-holiday schedule that sees the Smokies in Vernon tomorrow and home to Nanaimo Saturday.
First, as pictured above, a good contingent of the team helped out the local Salvation Army this week in advance of what certainly is their busiest time of year. Good work fellas!
Some audio for your enjoyment that I've neglected to post over the past few days:
I talked with former Smoke Eater Scott Jacklin following news he'd been named Atlantic Hockey rookie of the week for a second consecutive week. To listen, click here.
I chatted with a pair of Castlegar Rebels as well following their 6-0 shutout win over Spokane Tuesday.
For forward Diego Bartlett, click here.
For goaltender Jordan Gluck, click here.
Beesley on the Move: Former Nelson goaltender Marcus Beesley has been traded in the KIJHL to the Kamloops Storm for a player to be named later and cash. Beesley posted a 14-19 record last season with the Leafs, but was signed by the Prince George Spruce Kings at the beginning of this season. He even posted a shutout over the Smokies on October 14th. Beesley will get plenty of playing time in Kamloops, who of course were in the market for a veteran goaltender after Lyndon Stanwood joined Trail last month.
Personal Note: I'm off to Vancouver tonight for family reasons, and as such your typical gameday and post-game packages for tomorrow's game against the Vipers and Saturday's game against the Clippers may not be of its usual ilk. There will be no Trail broadcast tomorrow evening but I will be back Saturday for the pay-per-view against Nanaimo.
Posted by Chris Wahl at 9:34 AM