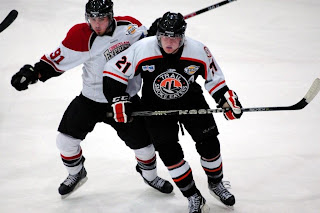 Cooper in action against Coquitlam earlier this month (Randy Emery photo)
Big congrats to Smoke Eaters forward Erik Cooper, who today was named BCHL Player of the Week!
The 20 year-old Alaskan put up five points in three games including that dramatic penalty-shot OT winner Saturday night in Salmon Arm. He leads the Smokies with 26 points this season and is the first Trail player to receive the Player of the Week nod this season.
The full release from the BCHL is available here.
Cooper's play has taken off since the start of the new year. Always strong in the face-off circle, he's getting more offensive opportunities thanks to a new role as power-play pointman, and pucks that didn't find the back of the net earlier in the season are starting to ripple twine now. Not only that, as one of only two overagers left on this year's Smokies squad, his off-ice role has become bigger, and speaking with head coach Bill Birks it's apparent both Cooper and captain Clayton McEwan are acting as strong role models to an ever-improving core that gives Smoke Eater fans something to really be excited about come September 2012.
Cooper (and the rest of the Smokies) will face his old club in Surrey Friday night.
Great job Erik!
Posted by Chris Wahl at 3:24 PM