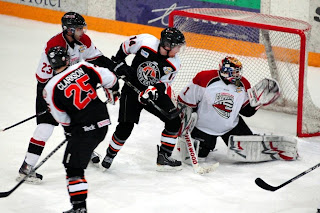 Siemer opened the scoring early in the first period, taking a centring-pass from Alex Kerfoot in the low slot and wristing a one-timer past Trail goaltender Lyndon Stanwood.

A strange hop in the Coquitlam zone landed on Erik Cooper's stick minutes later, the Alaskan fired home his first of two goals to even things up before Siemer capitalized again on a two-on-two rush with linemate Brady Shaw.

Coquitlam added to their lead early in the second period thanks to a short-handed tally from Connor Redmond. The ex-WHLer raced down the right wing on a two-on-one and fired low on Stanwood for his third goal of the season.

Trail answered back quickly. Cooper deflected Garrett McMullen's centring feed moments later to bring the Smokies back to within one, and then 1:10 later Tanner Clarkson stickhandled past two Express defenders in the left-wing corner and fired cross-ice to a pinching Marley Keca for the equalizer.

Coquitlam, though, would do the only scoring of the final frame. A Siemer shot from the goalline bounced to forward Malcolm McKinney, who while unabated in the slot wristed home the go-ahead marker.

Shaw would add insurance mopping up a loose puck after Siemer was stoned by Stanwood on a mid-third period breakaway.

Khaleed Devji made 25 saves to collect the victory for Coquitlam, who were without leading scorer Alex Petan for a third straight game.

The Smokies were right in this one, though, outshooting the Express 11-4 in the third period. Were it not for saves off the likes of Adam Fares alone in front of the net and a few missed nets, the result of this one might well have gone the other way. Cooper played one of his most inspired games of the season, while the line of Clarkson, Riley McDougall and Brandon Long continued to show some developing chemistry.

Up Next: The Smokies play a matinee Sunday against the Chilliwack Chiefs. Note the 3:00 PM faceoff at Cominco Arena.

KIJHL Tonight: Tyler Robinson scored twice, including the game-winner as Castlegar snuck past Creston Valley 4-3 in overtime. New Rebel Dylan Sibbald had an assist in his debut. Beaver Valley got a three-point performance from Mason Spear in a 6-3 victory over Kimberley. I should note the Rebels and Nitehawks tangle in Fruitvale Saturday (7:30, BV Arena) and Mountain FM will be on hand to help celebrate Beaver Valley's 30th anniversary. It should definitely be a fun night and hope to see a full house.

Local Look-See: Trail's Logan Proulx scored once as Cowichan Valley edged Nanaimo 2-1 in OT in other BCHL action tonight. The Capitals remain in first place in the Coastal Conference. South Slocan's Tyler Hlookoff had the OT winner in the University of Lethbridge Pronghorns beat the University of Calgary Dinos 3-2 tonight.
Posted by Chris Wahl at 11:28 PM