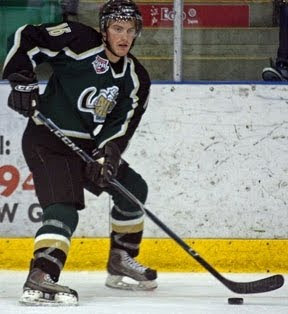 New Smokie Riley McDougall during his 2010-11 campaign with the AJHL's Okotoks Oilers
Who: Trail Smoke Eaters vs. Victoria Grizzlies
When: Jan. 7, 7:30 PM
Where: Cominco Arena, Trail

The only meeting of the season between the Smokies and Victoria Grizzlies goes tonight with Trail set to debut another piece of the 2012-13 roster. Calgary's Riley McDougall was acquired earlier this week from the AJHL's Calgary Canucks in a deal that sees defenseman Tanner Hicks head east to join the Brooks Bandits.

The trade means Trail may be a bit short on the back end this evening, but should be well-stocked in energy after Wednesday's dramatic comeback to force overtime against Salmon Arm. The Smokies welcomed leading scorer Clayton Chessa back with open arms, and anyone in attendance Wednesday could see his presence had a ripple effect through the rest of the team.

It's also a chance tonight for Adam Fares to face his former team for the first time since being acquired by Trail at the beginning of October. The Thunder Bay native played the first three games of the season with Victoria, tallying one assist. The lumbering forward didn't play much Wednesday on a fourth line with Adam Wheeldon and Kyle Horsman, but look for his role to increase as time goes on and he settles into life back in the lineup after missing the better part of two months with an injury.

Last Meeting: It's been awhile to say the least. Way back on December 11, 2010 the Smokies rode a Ryan Aynsley winner to a 2-1 away victory at Bear Mountain Arena. Interestingly enough, the only player to figure in the scoring, penalty minutes or goaltending records (for either team) who will play tonight is Victoria's Wade Murphy, who recorded an assist and 2 PIMs.

Our Opponent: Like the Silverbacks, the sixth-seeded Grizzlies are battling to stay alive in the playoff race, but received a big boost last night with a 4-3 win in Vernon. Victoria sits 6 points behind the 4th-seeded Coquitlam Express (who have two games in hand). Offensively, the Grizzlies' top line is led by the aforementioned Murphy; his 62 points (22-40) are good enough for fourth among the BCHL's scoring leaders. Linemates Mike Moran (18-28-46) and Wes Myron (17-25-42) are also within the top 20. The Grizz were without top-scoring defenseman Taylor Pernerowski in last night's 4-3 victory at Vernon, but they're a big bunch, including 6-5 Jesse Ursic. Former Revelstoke Grizzlies goaltender Garrett Rockafellow has been shouldering the load of late in goal after Jamie Tucker was hurt in a game in Duncan last month. The Smoke Eaters and Grizzlies lead their respective conferences in terms of goals allowed, Trail with 178, Victoria with 145.
In the Press Box: Trail will be without defenseman Shane Poulsen, while forward Taylor House is questionable. Victoria's Pernerowski missed last night's game (as mentioned above), while Jarryd Ten Vaanholt left in the second period and did not return.

Broadcast Info: The pay-per-view (and free audio options) can both be accessed here beginning at 7:25.

Local Hockey Tonight: Plenty going on tonight involving local squads. In the KIJHL, Nelson is home to Grand Forks (7:00, NDCC) while Beaver Valley hosts the Princeton Posse in a battle of division leaders (7:30, BV Arena). Selkirk College resume their BCIHL schedule tonight on Vancouver Island against the University of Victoria, while the major midget Kootenay Ice are in Kelowna for a two-game set against the Okanagan Rockets.
Posted by Chris Wahl at 12:09 PM