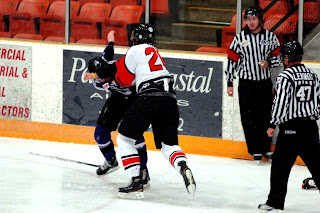 Who: Trail Smoke Eaters vs. Salmon Arm Silverbacks
When: Jan. 4, 7:30 PM
Where: Cominco Arena, Trail
The Smokies ring in the New Year with a five-game homestand, which begins tonight against Salmon Arm. After a December to forget, tonight marks an opportunity for this young team to get a fresh start and some positive momentum for the second half of the season, and also an opportunity for fans at the Cominco Arena to see some faces who haven't graced local ice for quite some time.
Forward Adam Fares (pictured above) plays his first home game in exactly two months tonight while Clayton Chessa and Luke Bertolucci are also expected to draw back in after missing 6 and 2 games respectively. In Fares, Trail gets a physical presence up front who isn't unwilling to drop the mitts, while Chessa and Bertolucci will provide some offensive spark for a team that has scored only four goals in their past five games.
I chatted with head coach Bill Birks yesterday evening about tonight's game, hear what he has to say here.
Last Meeting: Bryce Gervais and Kody Dhaliwal combined for seven goals as the Silverbacks thumped Trail 11-2 at Salmon Arm on November 9th. Salmon Arm has won all four meetings this season with three of the next four encounters (including tonight) set to be played in Trail.
Our Opponent: Trail won't have to worry about Gervais, who has since been traded to Penticton, or several other players including captain Brett Knowles, who was shipped to Cowichan Valley earlier this week. Gone as well since the last meeting are d-men Matt Brown (AJHL Calgary Mustangs) and Klay Kachur (Westside), as well as forwards Brock Balson (WHL Kamloops) and Kyle Oleniuk (SJHL). Salmon Arm has speed to burn with the likes of Wisconsin commit Morgan Zulinick and Devin Muller up front, but they are the only two 'Backs with 10 or more goals on the season. Brown's departure came about in conjunction with the acquisition of feisty d-man (and former Nitehawk) Taylor Love, who had an assist and 2 penalty minutes in his Salmon Arm debut Friday night in Vernon. Salmon Arm sits 9 points back of Prince George for the final playoff spot in the Interior Conference, so needless to say, the time to win is now.
In the Press Box: Trail forward Josh Roberts and defenseman Shane Poulsen are both out long-term, while forward Taylor House is also out tonight. Blueliner Tim Coish is questionable. Silverbacks forward Brad Robinson is out for the season.
Broadcast Info: Your requisite audio and video links are available here, either for myself or Silverbacks voice Scott Campbell. All the action on the Smokies pay-per-view end gets underway at 7:20.
Posted by Chris Wahl at 9:13 AM