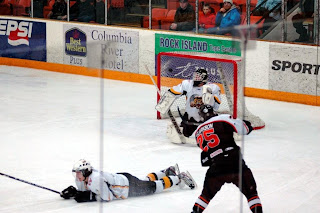 Tanner Clarkson scored twice, and Lyndon Stanwood made 31 saves as Trail bumped a nine-game slump with a 3-2 home-ice victory over the Victoria Grizzlies.

After a scoreless first period, Clarkson walked down the right wing and rifled a wrist shot over the shoulder of Grizzlies goaltender Garrett Rockafellow just shy of the 13-minute mark of period two.

For the West Kelowna product, it was his first goal in five games and third as a Smoke Eater, but he would add to his Trail account early in the third period to extend Trail's lead.

Clarkson converted a Brandon Long centring pass 2:20 into the final frame to ignite what was a wild third period at Cominco Arena.

The Grizzlies got back within one courtesy Alex Holland minutes later, but both Stanwood and Rockafellow kept their opposing offences at bay until Garrett McMullen put home an empty-netter in the final minute to extend Trail's lead to 3-1.

Victoria's Coltyn Hansen made things close once more moments later, wiring a wrister into the top right corner at 19:21 but the Smokies hung on for their first win since November 29th.

New Smoke Eater Riley McDougall tallied an assist in his Trail debut, playing on a line with Clarkson and high-school classmate Long.

For the Smokies, tonight's game was undoubtedly the most complete, engaging effort of the season. I can't think of a Trail player who didn't play well, and for this squad, a win over a team like Victoria (who themselves are fighting to get back into the playoff picture) can help only to boost the morale and confidence level.

Up Next: The Smokies host Rajan Sidhu, Nicholas Wong and the Coquitlam Express Friday night. Game time is 7:30.
Posted by Chris Wahl at 12:04 AM