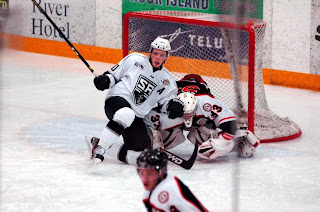 The Silverbacks raced out to a 4-0 lead, then held on to a surging, short-handed Trail squad to win 6-4 at Cominco Arena Friday.

The 'Backs scored twice in a fifteen second span before the game was a minute and a half old, as
Stefan Nicholishen and Alex Gillies (the latter on a two-on-oh rush) both beat Smokies starting netminder James D'Andrea from in close. Myles McCauley converted a one-timer ten minutes later, followed up by an great individual effort by Garrett Hendrickson to give the visitors a 4-0 lead heading into the break.

Trail woke up in the second period though, scoring twice in an 8-second span 2 minutes in. Brandon Long's slapper from the right point took a deflection off the leg of SA defenceman Mike Berry, then Erik Cooper tucked home a Garrett McMullen centring feed through the legs of 'Backs goaltender Adam Clark.

Just two minutes later, Jeff Kennedy was the recipient of a patented Cominco bounce in the Trail zone. He spun, shot, and roofed a wrister over the left shoulder of Lyndon Stanwood, who came on in relief of D'Andrea at the beginning of period two. Long would poke home a second goal amidst a goalmouth scramble to round out the second period scoring.

Both teams traded chances through the third before Long completed his hat-trick late in the frame to draw Trail to within one. The Calgarian circled the Silverbacks' zone on a Trail power-play only to outwait Clark and wrist home his 8th goal of the season. The aforementioned Kennedy would deposit an empty-netter in the dying seconds to secure Salmon Arm's win.

Not the prettiest of games to say the least, and something you might expect given the fact Trail had only fourteen skaters tonight (and four defensemen). The Silverbacks rolled 9 and 6 for a total of fifteen, and tired legs and mental mistakes were well apparent, especially given the frantic nature of the first fourty minutes.

That said, Trail were game for a four-goal comeback attempt tonight, especially after the two goals in quick succession early in the second period. A Stanwood save off a McCauley breakaway later in the frame only furthered the Smokies' resolve. Long, who coming into play tonight had scored four of his five goals away from home, seemed especially confident after potting his first of the night, and was my second star.

Up Next: The Smokies begin a three-game trip Thursday night in Penticton, that also includes stops in Merritt and West Kelowna. Saturday's game (next week of course) against the Warriors will be available on Smokies Ustream.

Stick-Tap: to the Kootenay Savings Community Foundation, for generously donating $25,000 to the Smokies toward the purchase of the team's new bus. That plus the $40,000 received last summer from the Columbia Basin Trust have (and will go) miles toward keeping Trail's travel costs much lower than if the team was reliant on charters. Thank you KSCU!

KIJHL Tonight: A pair of lopsided scores from Friday, as both Nelson and Castlegar's regular-season home send-offs proved worthwhile for home fans. The Leafs rode a four-point night from Matthew Naka in a 7-2 win over Beaver Valley (Smokies AP Craig Martin was ejected in the second period for fighting fellow Trail product Andy Miller). Castlegar trounced thirteen-skater Spokane 12-2 thanks to a seven-point effort from Scott Morisseau. The playoffs begin next Friday in Fruitvale and Castlegar.
Posted by Chris Wahl at 11:45 PM