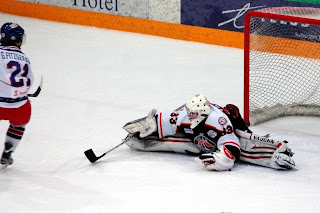 Lyndon Stanwood stretches out to make a save as Gerry Fitzgerald looks on (Randy Emery photo)
Three goals in the first period helped Prince George to a second consecutive victory over the Smokies at Cominco Arena Saturday, and again, it was the Fitzgerald triplets who did the most damage.

Trail jumped out to an early 1-0 lead on a power-play four minutes in. Brent Baltus tapped home a rebound after Erik Cooper launched a point shot. Again for Baltus, a goal from within five feet of the goal-mouth, as the 19 year-old has made a habit of being right on the doorstep, especially on the power-play.

The Spruce Kings stormed back as part of a nineteen-shot first period. Gerry Fitzgerald converted the first of his two goals less than five minutes after Baltus had given Trail the lead, then brother Myles put Prince George ahead on a rocket from the slot.

Myles was the recipient of (yes another) Cominco bounce, as a clearing attempt smacked off a stanchion and landed at the forward's feet. Gerry would add a third Prince George goal before the period was up.

After a scoreless second, the momentum appeared to be shifting in Trail's favour as Riley McDougall fired home a short-handed goal 21 seconds into the third off a turnover in the Spruce Kings zone.

The teams traded chances until, at the 7:43 mark Jujhar Khaira appeared to haul down Cooper behind the goalline, steal the puck and wrist home a much-needed insurance marker from the right-wing circle. A frustrating moment to be sure from a Trail standpoint (as indicated by many of the 746 in attendance following the goal), and undeniably a turning point, but a moot point now, close to four hours after the final whistle.

Ty Swabb stopped 24 of 26 shots for Prince George while Lyndon Stanwood made 36 saves for the Smokies, not including (by my count) 4 or 5 hit posts by Prince George.

Trail played with only four defenseman, as both Joren Johnson and Brandon Egli were out injured, while AP Bryce Perpelitz (who skated well Friday) was unavailable for selection.

Up Next: The Smokies continue a homestand Thursday night against the Westside Warriors, who just about completed an improbable five-goal comeback in Penticton tonight.

Local Hockey Tonight: Castlegar rebounded strongly from Friday's lopsided home loss to the Nelson Leafs with a 7-3 thumping of their own at the NDCC. Smokies AP Stuart Walton had three goals for the Rebels, while former Trail d-man J.J. Beitel tallied for the Leafs. Beaver Valley defeated Golden 6-1 in Fruitvale. The major midget Kootenay Ice were doubled 6-3 by the Vancouver Northwest Giants in Trail (the two teams go at it again at 9:45 Sunday morning at Cominco). Former Nitehawks Layne Stopanski and Kris Davis both scored in Okanagan College's 5-2 victory over Selkirk College. Jordan Wood had both Saints goals. Selkirk faces Eastern Washington Sunday afternoon in Castlegar (1:30, Complex).
Posted by Chris Wahl at 1:32 AM