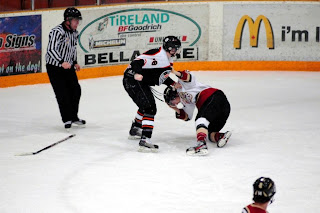 Three goals in the third period paced Westside to a 4-1 victory over the Smokies at Cominco Arena Thursday.

Shawn Hochhausen led the attack for the Warriors with two goals, including the game-opener late in the first period. The former Nelson Leaf cut to the front of the net from the right-wing corner and lifted a backhand over Trail's Lyndon Stanwood in close proximity.

Hochhausen's goal held up until the dying moments of period two, when Trail's Erik Cooper unloaded a wrister from the point on a Smokies power-play through heavy traffic to level the score.

Tempers started to flare late in the second period, but swelled to a boil in period three.

After Reid Simmonds tapped home off a clever individual effort from Max French to give the visitors the lead, the Warrior forward drew a major penalty on Cooper off a play in the Trail zone. Facing the boards, Simmonds was thrust into the wall after a Cooper cross-check, only to return to action once play resumed. Cooper was assessed a cross-checking major and a game misconduct by referee Eric Dasti, a penalty which for all intents and purposes quashed any chance at a Trail rally. Hochhausen scored on the extended penalty, and for his efforts Simmonds was sent hurtling into the net minutes later by Taylor House to spark a skirmish that ended with House besting Westside's David Pope in a swift, decisive bout in the Trail zone.

Connor Dempsey added some insurance late in the third, outwaiting a sliding Stanwood to score his 22nd of the year on a backhand.

Stanwood, despite allowing four goals, was for my money the best Smoke Eater tonight. He made several saves through the first 40 minutes to keep the game close, including a breakaway stop off Dempsey early in the first after Trail had stormed out of the gate with several offensive chances.

For a team that arrived in Trail 55 minutes before game time, the Warriors had plenty of jump. Goaltender James Leonard, making his first start since November, made 26 saves, though like Ty Swabb of Prince George last weekend he wasn't relied upon to keep his team in the game.

All in all a disappointing result which could have an impact on future Smokies games if Cooper is assessed any supplemental discipline. For my money, (and admittedly keeping my opinion as neutral as possible), I don't think the hit was worthy of a major penalty, particularly given that Simmonds was not hurt on the play. That said, the Warrior forward was in a vulnerable position, but I would also argue that Cooper wasn't acting with the intent of taking advantage of that vulnerability in the least.

Up Next: Trail goes right back to work Friday against Salmon Arm. Faceoff is at 7:30 at Cominco Arena.

KIJHL Tonight: The Nelson Leafs spoiled Grand Forks' home finale with a 4-1 win at the Grand Forks Arena. Scorers were not available at time of writing.
Posted by Chris Wahl at 11:29 PM