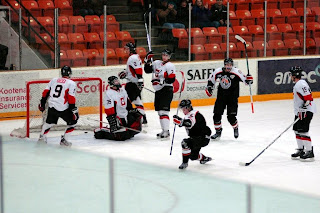 Brandon Bruce completed a Centennial comeback with a one-timer from the high slot as Merritt overcame a three-goal third-period deficit to win 4-3 at Cominco Arena Wednesday.
Bruce, a Cranbrook product, fired a pass from Richard Sabourin low on Smokies goaltender Lyndon Stanwood 1:37 into extra time.

Trail started with a bang, as Garrett McMullen smacked home a natural hat-trick in the opening frame, scoring once off his skate, and twice more with low slapshots that ricocheted to him off Merritt sticks and body parts. The Rochester native was flying all night, and played a significant physical presence too, throwing checks and creating space for linemates Connor Tiechko (who had two assists) and Erik Cooper (who originally was credited with the opening goal).

The second half of the game started to swing more in the visitors' favour, though. Merritt enjoyed a 17-5 shot advantage in the middle frame and could well have hit the scoreboard sooner were it not for efficient goaltending from Stanwood.

The Cents did score before the two minute mark of period three, as Brendan Lamont whizzed home a low shot that snuck through Stanwood's pads. Jakob Reichert and Chad Brears tapped home rebounds in a 38-second span later in the period to bring the score level.

Trail's lack of healthy bodies played an ever-increasing role as the game went on. For the third straight game, the Smokies dressed only thirteen skaters (the ongoing KIJHL playoffs preventing many AP callups from being released to the club), and as a result the game swung more and more in Merritt's favor as time progressed.

Up Next: Trail play twice more on home ice this weekend against the Prince George Spruce Kings, Friday and Saturday. As a follow-up to tonight's $4 ticket night the Smokies are offering four tickets for $30 for both home games. Even though tonight's game didn't end up the way Trail fans would have hoped, it's hard to argue about the entertainment value afforded by what amounts to a $7.50 ticket.
Posted by Chris Wahl at 12:35 AM