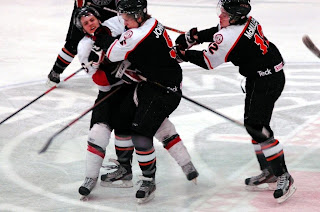 Merritt's Silvan Harper and Trail's Joren Johnson collide at centre-ice in the first period (Randy Emery photo)
A physical home finale for the Smokies went Merritt's way Friday, as the Centennials clinched home-ice advantage in Round One of the BCHL playoffs with a 6-2 victory at Cominco Arena.

Merritt got things going early, when a Brandon Bruce shot from the left circle was deflected through the legs of Trail netminder Lyndon Stanwood by Jakob Reichert. The 6-5 forward was a physical presence all night, and got his club off to a great start with his fourteenth goal of the season.

The Centennials would add to their lead before period's end, as Payton Schaefer wired home a rebound from the slot. Merritt outshot Trail 18-8 during the opening frame.

The second period went similarly to the first. An odd pileup in front of the Smokie net allowed Regan Soquila to give the Cents a 3-0 lead, before a pretty act of patience from Merritt captain Evan Stack on a breakaway extended the lead to four before fourty minutes were through.

Silvan Harper gave Merritt a 5-0 lead four minutes into period three (for Harper, his fifth goal against Trail out of eleven overall), before the Smokies found a way to solve Merritt 'tender Tyler Steel.

A crisp cross-ice pass from Mitchell Foyle sent Connor Tiechko in alone down the left-wing side, the Chilliwack product slipped a snapshot underneath Steel's pads to break a six-period goalless drought for Trail. The Smokies got a weird bounce of their own minutes later when Garrett McMullen's wrister rebounded off Steel, off Merritt defenseman Richard Sabourin into the back of the net to cut the lead to 5-2.

The Cents added one more for good measure though. A quick feed from Brendan Lamont from the right circle to the left-hand post set up Scotty Patterson's first BCHL goal. The AP from the Osoyoos Coyotes made the score 6-2 with a handful of seconds left on the clock.

Despite what has been a long and frustrating season, nearly 1,000 fans turned up at the Cominco Arena Friday to send their team off. And while tonight's (and by extension this season's) results have been difficult to absorb, I caught more than a few excited whispers among tonight's spectators about what this group might be able to accomplish come next fall.

Up Next: The Smokies hop on the bus for one last trip that sees a return engagement with the Centennials Saturday night in Merritt. Both games (Saturday in Merritt and Sunday in Chilliwack) will be broadcast on the Smokies Ustream channel.

KIJHL Tonight: Castlegar answered back on home ice in Game Three of the KIJHL Neil Murdoch division final, beating Beaver Valley 3-2 at the Complex to cut the Nitehawks' series lead to 2-1. More than 700 fans packed the Complex to see Scott Morisseau win the game for Castlegar late in the third period. Brenden Heinrich scored twice for the Rebels while Justin Niminiken and Scott Davidson replied for the Nitehawks. Game 4 is Saturday in Castlegar.
Posted by Chris Wahl at 11:41 PM