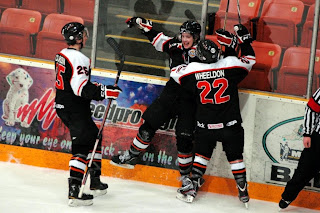 Brent Baltus (centre) celebrates his second-period goal (Randy Emery photo)
Myles Fitzgerald converted on a breakaway in 3-on-3 overtime to give the Spruce Kings a 4-3 extra-time win over a short-handed Smokies squad that showed plenty of heart, and plenty of poise Saturday at Cominco Arena.

The Spruce Kings forward was sprung free by his brother Leo and converted 1:15 into the second overtime period to bring Prince George into a second-place tie with Merritt with 70 points each.

Despite again missing five injured regulars (for statistics' sake, the season-total man-games lost by this Smoke Eaters club now stands at 253), Trail battled, and worked hard enough to earn a point against a big, talented Spruce Kings club that needed a third-period equalizer from Gerry Fitzgerald to force overtime.

The Rochester native upped his week's goal tally to five early in period two tapping home an Erik Cooper rebound, before Jarryd Ten Vaanholt snapped home a power-play marker of his own to bring Prince George back to within one minutes later.

Brent Baltus redirected an Adam Wheeldon shot through Thompson's legs to restore the two-goal advantage at 3-1, before one of the prettiest goals of the season at Cominco Arena put PG back on the board.

On a short-handed rush, Spruce Kings forward Michael Colantone sped down the right wing, turned across the circle dangling the puck past a Trail defender, only to outwait Smokies goaltender Lyndon Stanwood to put home his 29th tally of the season.

Four-on-four OT solved nothing, and the game remained level until Myles Fitzgerald's winner.

It was another gutsy effort from the orange and black, and a polar opposite to last night's 6-1 loss. Tonight, Trail changed well, were rarely caught for extended periods in their own zone, and made smart, simple plays to create chances and conserve energy. Shane Poulsen is beginning to emerge as a real stud on Trail's blue line; the 17 year-old played at least 30 minutes tonight in all situations, and showed plenty of poise in his own zone as well as collecting an assist in the offensive end. McMullen's effort both tonight and Wednesday against Merritt makes a potential BCHL Player of the Week case. He was unlucky not to register his second hat-trick of the week, hitting the crossbar shortly after tucking his second goal past Thompson in the second period.

Up Next: Trail makes one final visit to Penticton Tuesday night. Please note there will be no Trail broadcast, though each of the final three games next weekend will be covered. The Smokies gave the Vees a real run for their money last time out February 23rd, a similar effort to tonight's game could produce a very similar type of game.

Local Hockey Today: Two third-period goals helped the Thompson Blazers to a 5-3 victory over the major midget Kootenay Ice this afternoon in Trail. Kootenay closes out their season tomorrow (later this?) morning at 9:45 at Cominco Arena against the same Blazers club.
Posted by Chris Wahl at 12:30 AM