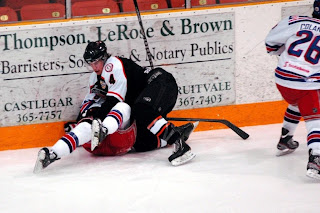 The Spruce Kings scored five times in the second period to break what was a tense, close game wide open, clinching a berth in the BCHL post-season in the process.

The two teams played to a scoreless saw-off after twenty minutes, with the best chance for either side being an Erik Cooper rebound that forced Prince George goaltender Ty Swabb to lean back and flash the leather in desperation.

Prince George started period two with a bang, as Gerry Fitzgerald fired a shot from just outside the crease past Trail starter James D'Andrea less than two minutes into the frame.

The Spruce Kings took advantage of three consecutive power-play goals from Chase Golightly, Jujhar Khaira and Michael Colantone (D'Andrea was replaced by Lyndon Stanwood following Khaira's tally), before Myles Fitzgerald tapped home a loose puck to round out a fruitful second period for the visitors.

Zack Rassell converted a Golightly centring pass early in the third to extend Prince George's lead to 6-0. The scoreline held until the final two minutes of the game when Brent Baltus broke Swabb's shut-out bid on a Trail power-play.

The Smokies were again short-staffed, with only fourteen skaters in the lineup (the same thirteen as Wednesday plus affiliate call-up Mitch Foyle). Creston Valley's elimination from the KIJHL playoffs brings about hope there could be more warm bodies for Saturday's return engagement with PG, given that three Thunder Cats (Dane Birks, Jesse Collins and Tre Potskin) are signed to AP cards.

Up Next: Trail concludes the weekend with another matchup with Prince George Saturday (7:30, Cominco Arena). The Spruce Kings remain the only team in the Interior Conference against whom Trail has yet to secure a point this season.
Posted by Chris Wahl at 11:36 PM