1-on-1 With New Saints Coach, Derochie To OC

I chatted with Dubois late last week about his vision for building the Saints into a perennial contender, listen to that conversation here.

The Saints also announced this morning they've received a commitment from Creston Valley Thunder Cats captain Scott Swiston for the 2012-13 season. Swiston put up 61 points in the 2011-12 season. His commitment marks the sixth new face signed by the Saints over the course of this off-season, including PIJHL scoring champ Thomas Hardy.

Hawks Captain Commits: Way late on this one (at least here), but big congrats to Beaver Valley captain Chris Derochie on his commitment to BCIHL Okanagan College last week. Derochie led BV in scoring with 101 points in '11-12 (his third season with the club), and joins a Coyotes squad that included former Nitehawks Layne Stopanski, Patrik Martin and Kris Davis as well as ex-Leaf Miles Houston and ex-Rebel Corey Bulach last season. Way to go Chris!
Posted by Chris Wahl at 9:30 AM No comments:

Some tape for your listening pleasure.

I chatted with Nitehawks head coach Terry Jones earlier in the week to get his thoughts on the Cyclone Taylor Cup and reflect on what was a fantastic 2011-12 season in Beaver Valley, to listen click here.

I also spoke with Penticton Vees forward (and Trail native) Travis St. Denis yesterday in advance of tonight's Doyle Cup opener in Brooks. St. Denis is one of five former Smoke Eaters taking part in the best-of-seven, with forwards Matt Wilkins, Ryan Luiten, and defensemen Tanner Hicks and Colton Semenok all part of a Bandits squad that captured their first-ever AJHL title last week. To listen, click here.
Posted by Chris Wahl at 9:36 AM No comments: 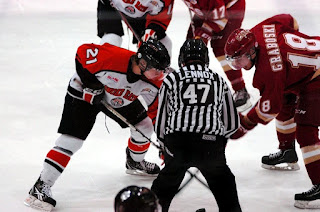 As announced last week on Mountain FM and the Smokies' website, graduating forward Erik Cooper is off to college next season, having secured a scholarship to the NCAA Division III St. Norbert Green Knights.
The De Pere, Wisconsin-based school features former Smokie Cullen Bradshaw, and the Green Knights are two-time defending NCAA DIII champs.
I chatted with Erik late last week about the decision and what he expects from his next four years, listen to that conversation here.
Cooper was one of the hardest-working players on Trail's roster last season, and for him secure his hockey-playing future in Wisconsin has to be a real treat and a tip of the cap to his work ethic. Congrats Erik and best of luck in your studies and your time on the ice with the Green Knights.
Posted by Chris Wahl at 1:55 PM No comments:

A tough go in Abbotsford for the BV Nitehawks, who finished fourth in the four-team Cyclone Taylor Cup over the weekend.
Beaver Valley dropped Sunday's bronze medal game 5-3 to the Delta Ice Hawks, and mustered only seven goals through four games. 17 year-old Dallas Calvin led the Nitehawk charge with 2 goals and an assist for the tournament.
The host Abbotsford Pilots won the Cyclone Taylor Cup for the second time in franchise history, defeating Victoria in the gold medal game. The Pilots will now represent BC at the Keystone Cup in Saskatoon.
Only four KIJHL teams have hoisted the provincial trophy in the last fifteen years: Revelstoke in 2010, Osoyoos in 2005, Sicamous in 2002 and the Nitehawks in 2001. The last West Kootenay side to reach the final was Nelson three seasons ago, they lost to former Smokies Rajan Sidhu,Clayton Chessa and the Richmond Sockeyes.
Despite what had to have been a frustrating weekend, full credit to the 'Hawks for a fantastic 2011-12 season. Beaver Valley were a formidable force this season and are well-deserving KIJHL champs.
Posted by Chris Wahl at 11:53 AM No comments:

Fresh off their 1-1 draw with Delta yesterday afternoon, the Beaver Valley Nitehawks will try to jump into first place in the Cyclone Taylor Cup standings this afternoon against the Victoria Cougars (3:00 PM, MSA Arena, Abbotsford).
Nitehawks goaltender Mike Vlanich turned in a 43-save effort yesterday against the Ice Hawks in yesterday's draw. Delta went ahead late in the first period on a John Proctor power-play deflection before Dallas Calvin put home a sharp wrister from the left-wing circle late in the middle frame.
Beaver Valley's top line of Chris Derochie, Craig Martin and Ryan Edwards generated the bulk of the scoring chances, with Vlanich making a game-saving stop on Delta's leading playoff scorer Cody Fidgett on a short-handed breakaway midway through the third period.
Today they face a Cougars squad that scored three unanswered goals to nip the host Abbotsford Pilots 3-2 last night. Chris Bannister scored a natural hat-trick for the VIJHL champs.
This afternoon's game is available on pay-per-view here. The Nitehawks wrap up the round-robin portion of the tournament tomorrow night against the Pilots.
Posted by Chris Wahl at 9:18 AM No comments:

After a long layoff, the Nitehawks open up the Cyclone Taylor Cup provincial tournament this afternoon in Abbotsford.
Beaver Valley faces the PIJHL champion Delta Ice Hawks (3:00 PM, MSA Arena) in their first tournament game in eight years.
The 'Hawks are two-time Cyclone Taylor Cup champions, most recently in 2001; this year's tournament also features the PIJHL finalist (and host) Abbotsford Pilots and the VIJHL champion Victoria Cougars.
This weekend's action is available on pay-per-view, to find out more click here.
Posted by Chris Wahl at 11:31 AM No comments:

A couple audio hits before the holiday weekend.
I chatted with the head coach of the KIJHL champion Beaver Valley Nitehawks Monday, after his club dispatched the Kelowna Chiefs to win their first league title in eight years. To hear Terry Jones' thoughts on the win, the finals, and what lies ahead for his squad, click here.
I also caught up with Smokies prospect Braeden Jones following this past weekend's rookie camp from his home in Edmonton. The 17 year-old defenseman talks camp, Trail, and his BCHL hopes and dreams here.
Posted by Chris Wahl at 2:51 PM No comments:

A mood of anticipation and excitement at Cominco Arena this weekend for the Smokies' annual spring camp.
About 70 players took part in the three-day session with an eye on catching the attention of Trail's brass ahead of the always-busy summer recruiting season.
I chatted with several returning players who were on hand over the weekend for their thoughts on camp, as well as the sense of anticipation about next season.
For Shane Poulsen, click here.
For Joren Johnson, click here.
For Brandon Egli, click here.
For Adam Wheeldon, click here.
For graduating Smokies captain Clayton McEwan, click here.
For AP draft selection Mitch Foyle, click here.
As many as 20 players from this weekend's camp could be invited back to Trail for main camp in August, but the Smokies have already received commitments from a pair of prospects.
17 year-old forward Brenden Heinrich spent last season with the KIJHL's Castlegar Rebels (14-18-32 during regular season, 5-11-16 in playoffs), and also played a handful of games at the BCHL level with Trail. The Boswell product is a smart, smooth-skating forward who didn't look out of place in a two-way role during his time as a Smokies callup, and centred Castlegar's second line in the playoffs this past season.
Fellow '94 product, defenseman Braeden Jones will also be back in Trail this August after putting on an impressive show over the weekend. Jones put up 10 points (5-5) with the Edmonton Knights of Columbus Pats midget AAA program last season, and stood out on his side's back end this past weekend. Jones is a quick skater who makes hard, smart plays in his own end, and isn't afraid to get a bit mean in front of his own goal either.
Posted by Chris Wahl at 12:08 PM No comments:

Craig Martin scored twice, including the eventual game-winner midway through the second period as Beaver Valley captured their first KIJHL title in 8 years, and sixth in franchise history with a 4-2 win at Kelowna last night.
The 'Hawks, who finished 31 points ahead of the Chiefs during the regular season, swept the final series as part of a 16-5 overall playoff record.
Dallas Calvin posted back to back 5-point nights in Games 2 and 3, and Beaver Valley is now bound for their first Cyclone Taylor Cup since 2004, where they'll serve as the first West Kootenay entry since the 2009 Nelson Leafs.
This year's 'Hawks club returned a strong core of players from a team that last year quietly posted a 32-13-1-4 record, and through the playoffs got key contributions from everyone from captain Chris Derochie down to the 1A-1B tandem of Mike Vlanich and Zach Perehudoff between the pipes.
The Cyclone Taylor Cup will be a challenge, as the 'Hawks get set to face the cream of the crop from our province's 2 other Junior 'B' leagues. Here's a look at Beaver Valley's schedule for the tourney which opens in 10 days' time in Abbotsford.
Thursday, Apr. 12: Beaver Valley vs. Delta Ice Hawks (PIJHL), 3:00 PM
Friday, Apr. 13: Beaver Valley vs. Victoria Cougars (VIJHL), 3:00 PM
Saturday, Apr. 14: Beaver Valley vs. Abbotsford Pilots (host), 7:30 PM
Sunday, Apr. 15: BRONZE MEDAL GAME, 11:00 AM
Sunday, Apr. 15: GOLD MEDAL GAME, 3:00 PM
All games are at MSA Arena, Abbotsford
Posted by Chris Wahl at 9:02 AM No comments: