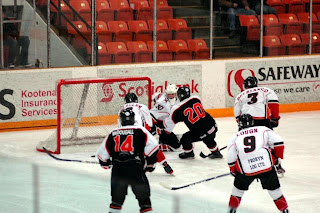 The Vernon Vipers announced yesterday they've secured the commitment of Beaver Valley forward, and Trail AP Craig Martin for the 2012-13 BCHL season. Martin put up 96 points with the KIJHL champion Nitehawks last season, adding 5 goals as an affiliate with the Smokies.

The full release from the Vipers is available here.

Congratulations to Craig on making the jump up. Anyone who had the opportunity to see him play at either the Junior "A" or "B" level last season knows full well he could have been a full-timer in the BCHL as a sixteen year-old, but a full season tearing apart the KIJHL with Ryan Edwards and Chris Derochie worked wonders for his confidence too. I'm told several teams (including Trail) were interested in procuring Martin's services, no doubt he will be an impact player in Vernon next season just as he was in limited time with the orange and black.

All the best in Vernon and I'm sure we'll see you around the rink next year!
Posted by Chris Wahl at 12:05 PM