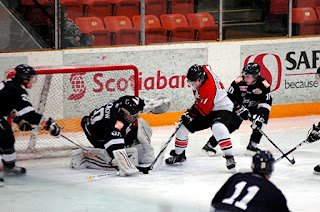 Smoke Eaters forward Luke Bertolucci has signed with the Western Hockey League's Edmonton Oil Kings. The defending WHL champs announced the deal today (read here) and the Montrose product will join the club at their main camp in late August.

He was Edmonton's 10th round selection (200th overall) in the 2010 WHL bantam draft, and played with current Oil Kings Curtis Lazar and Tristan Jarry on the Team BC squad that won gold at the 2011 Canada Winter Games.

I haven't had the chance to chat with Bertolucci as of yet, but he tweeted this morning that he's "very excited for the opportunity." He could well be on his way to a breakout season after being sidelined with a pair of injuries late in the season when it appeared as though he was gaining confidence each time he stepped on the ice.

Congrats "Bert," and best of luck in Oil Country!
Posted by Chris Wahl at 4:35 PM