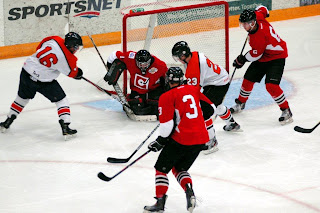 Awesome news from the Smokies this morning, as local forward Scott Davidson has committed to NCAA Division I Quinnipiac University. The 17 year-old had a dynamite camp and pre-season, tallying 7 points including a 5-assist effort last Saturday night against Merritt, this after making only 11 regular-season appearances with Beaver Valley of the KIJHL in 2011-12.

The full release from the team is posted here.

This news should give Davidson a real shot in the arm heading into this weekend's Save-On Foods Showcase in Chilliwack, where he will make his BCHL debut against the Capitals and Centennials. It's also a real boost to a franchise looking to re-assert itself in a tough Interior division, and to the fans in Trail who now will get to watch a local kid for two seasons before he embarks on a collegiate career south of the border.

Davidson is the second member of the 2012-13 Smokies to have a college commitment under his belt, joining overage forward Alex Holland, who committed to Merrimack earlier this year. He's also the second local Smokie to commit to Quinnipiac in recent years, joining current Bobcat freshman Travis St. Denis, who spent 3 of his 4 BCHL seasons with the orange and black.