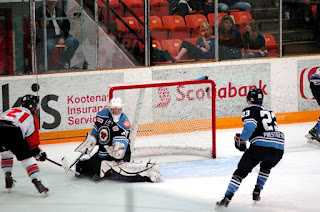 Talk about a turnaround.

The Smokies put together their most complete effort of the young season Saturday, scoring early and riding a red-hot goaltender to a 3-0 shutout win over the Vernon Vipers at Cominco Arena.

Lyndon Stanwood made 33 saves to collect his first-ever BCHL shutout, while Luke Sandler and Scott Davidson opened their Smoke Eaters accounts as Trail won for the second time in as many tries on home ice this regular season.

The Smoke Eaters opened the scoring just shy of the two-minute mark on a great solo effort by Chicago native Sandler. He drove the net from the right corner and outwaited Vernon goaltender Joe Young before tucking the puck into the left corner of the net.

A late first-period power-play would provide another net present. A sharp cross-ice feed from Garrett McMullen to Davidson wound up in the cage after the 17 year-old settled the puck, walked in, and lifted a shot over Young's shoulder for his first BCHL goal.

A scoreless second period would see Vernon's bench shortened through three separate ten-minute misconduct penalties, including one to captain Brett Corkey after he scrapped McMullen while defending defensive partner Marc Hetnik. And despite being run over midway through the period by Vernon forward Brendan Persley, Stanwood stayed strong in the Smoke Eater goal, making 13 middle-frame saves to keep the Vipers off the scoresheet.

After killing off a pair of early penalties, the Smokies would add insurance on the man-advantage late in the third. A Braden Pears point shot deflected off a Viper player to a waiting Brent Baltus at the side of the net. The 20 year-old tapped in his second goal in as many games, and Trail defeated the Vipers for the first time since November of 2010.

Defensively, the Smoke Eaters were very sound tonight. Vernon's best chance came midway through the second period, when Adam Tambellini struck the cross-bar after being left alone in the slot with the puck. Pears and fellow 19 year-old Marley Keca are proving to be valuable additions on the back end, each logging upwards of 25 minutes and keeping a steady influence on their younger teammates.

I continue to be impressed by the two-way play of Tyler Berkholtz, too. The overager was Trail's best face-off man on the night and recorded at least three key deflections on the PK as Trail improved to 10/11 while short-handed on home ice this year. McMullen seemed to have an extra gear, offensively too, after being shifted to the wing on a new-look line with Jesse Knowler and Austin Adduono.

Stanwood was, in a word steady. Like last Friday's performance against West Kelowna, he was sound positionally, and had excellent rebound control too. He wasn't forced into many tough saves, either.

Up Next: The Smokies wrap up the three-in-three weekend tomorrow afternoon against the Powell River Kings at Cominco Arena. Please note the game time of 3:00 PM.
Posted by Chris Wahl at 12:29 AM