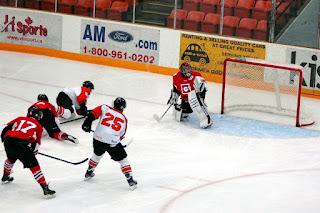 The Smoke Eaters picked the perfect time to find their offense, scoring 7 unanswered goals to dispatch the Merritt Centennials 8-3 Saturday in BCHL pre-season play in Trail.

Captain Garrett McMullen led the way for the Smokies with a hat-trick (including a short-handed marker in the final minute of the second period that served as the game-winner), while local forward Scott Davidson chipped in 5 assists.

The Smokies got started early, as McMullen pounced on a loose puck in the crease just 27 seconds into the game. Merritt replied quickly on goals from veteran defenseman Richard Sabourin and rookie forward Bennett Huber to take a 2-1 lead into the intermission.

The Cents would extend their lead 2 and a half minutes into the second thanks to Kurtis Klinger, who buried a rebound past an outstretched Lyndon Stanwood.

The two sides would change goaltenders midway through the game, with Stanwood replaced by Braden Krogfoss and Merritt's Russell Sanderson making way for Phoenix Logan-Hill, and Trail got to work immediately after.

New blueliner Djordje Leposavic scored the first of two goals on the night on a Trail power-play, sneaking down the left wing after a give-and-go with Brent Baltus to backhand past Logan-Hill from a sharp angle.

Trail would tie the game 4:17 later on a low slapper from Braeden Jones that found its way into the net through a bevy of traffic. Then, while short-handed, McMullen created a turnover at the Trail line and raced down left-wing to slap the go-ahead marker off Logan-Hill's glove and in.

The third period would provide the Smoke Eaters more chances to sync up their offense. Leposavic fired a picture-perfect wrister glove side on Logan-Hill for Trail's 5th goal 3:44 into the third, before Matti Jmaeff cut hard to the net from the right side and tucked home a five-hole forehand.

Rookie Bryce Knapp and McMullen would round out the scoring, and Krogfoss would stop all 22 shots he faced in the Trail goal to preserve the Smokies' first victory of the pre-season.

The Centennials iced a young lineup (much like Trail did in Merritt on Friday), but nonetheless they created several dangerous opportunities. Sabourin was a workhorse on the back end and the forward core was led by returnee Brendan Lamont, who tallied two assists.

The win is surely relief for everyone in the Smokies camp however, despite it being pre-season. After a long road trip that netted no victories and where the team struggled to find offense, Saturday's second-half explosion will act as a big confidence boost for Trail as they head into the regular season.

Up Next: The Smokies play the first four games of the regular season on the road, beginning with the Save-On Foods BCHL Showcase in Chilliwack next weekend. Trail will face Cowichan Valley Saturday, September 8th at 6:30 before a rematch with the Cents the following afternoon.