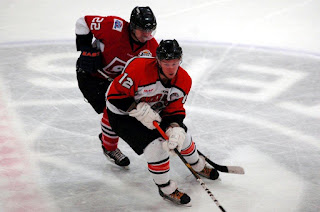 The Smoke Eaters have finalized their 2012-13 opening day roster five days ahead of the official start to the regular season in Chilliwack. As announced at the start of training camp, 20 year-old forward Garrett McMullen will serve as captain for a group that includes only 8 returnees from 2011-12.

For a full release issued on the part of the team, please visit the Smoke Eaters website here.

Here's a breakdown of who will sport the orange and black come this weekend at the Save-On Foods Showcase.

If last week's 4-day swing was any indication, this will (like last year), be a very tight group on and off the ice, and a talented bunch to boot. We'll find out for real starting at 6:30 PM Saturday when Trail faces Cowichan Valley in their Showcase opener.
Posted by Chris Wahl at 2:56 PM

Nice to see more than one local kid on the team this year. Should help put some more butts in the seats, and show future local youngsters they don't need to leave town to play Jr A.