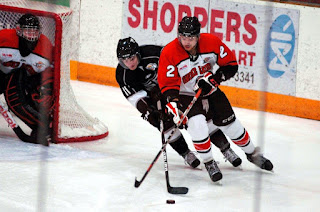 Gillies opened the scoring off a rebound seven minutes into the game, finding himself with an open net from the right circle for his seventh goal of the season.

The score remained static until a controversial moment on a Trail power-play in period two. Defenseman Valik Chichkin appeared to have been high-sticked while handling the puck at the blue line, but despite the protestations from the fans and Smoke Eaters bench, Salmon Arm carried the play down the ice on a short-handed two-on-one, a play which led to Anthony Croston's first BCHL goal after Bryden Marsh's initial effort was saved by Trail goaltender Lyndon Stanwood.

Gillies would increase Salmon Arm's lead to 3-0 on a nifty cross-ice feed from Evan Anderson in the third before Steven Iacobellis rounded out the scoring with his first goal of the season.

Salmon Arm goaltender Adam Clark made 28 saves to collect his first BCHL shutout, making first-period stops from close range off Scott Davidson and Tyler Berkholtz, and getting help from the cross-bar off a Brent Baltus snapper in the dying moments.

It was a game Trail needed to have, but the Smokies did not have nearly the level of execution needed to come away with two points. Credit Salmon Arm for playing a simple, hard-checking road game tonight. It wasn't flashy, and at times tonight the product on the ice might well have come short of the dollar value on the ticket, but in the end, the better team won, plain and simple.

Up Next: Trail will get an early chance at revenge against the SilverBacks, with a rematch in Salmon Arm Saturday at 7:00.

Technical Difficulties: I would like to extend my sincere apologies for anyone trying to tune in on the Ustream broadcast tonight, as the feed was unavailable for the first and third periods. Reading the various message boards associated with the software, I understand there was a system-wide outage with the "Ustream Producer" software I use to broadcast the games. Stay tuned to the blog, Smokies website and Smoke Eaters Facebook page in the near future as tonight's frustrating ordeal might well lead me to try a new web streaming provider. I've begun testing and will give plenty of notice if a switch is to be made.
Posted by Chris Wahl at 12:53 AM