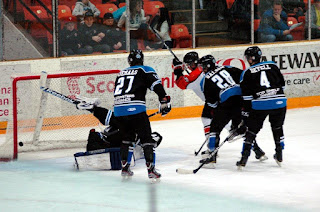 The Smokies scored 3 times inside the first nine minutes, and Adam Todd made 36 saves in a 5-2 home win over the Penticton Vees Saturday.

A night after the Smokies outgunned Prince George 8-7 in overtime, Trail put together a much more consistent defensive effort, jumping on Penticton early and earning a gutsy two points against the first-place team in the Interior division.

Trail opened the scoring on an early power-play. Valik Chichkin's point shot took a deflection off the stick of Ryan Edwards, beating a screened Vees goaltender Chad Katunar. It was Edwards' first BCHL goal, and a marker that set the tone for the first period.

Trail added to their lead just over two minutes later. A shot bounced off a Penticton shinpad and found Brent Baltus in the slot. The Smokies' leading scorer caressed the puck, then wristed it short-side on Katunar for his 16th goal of the season.

Connor Collett would add a third at the 8:35 mark. After Shane Poulsen's point shot was stopped, the Calgarian thrust himself upon the rebound, beating the Penticton netminder for his second tally in as many games.

The Vees would up their game in period two, but not before the Smoke Eaters added to their lead. Luke Sandler joined the party as the recipient of a nifty cross-ice feed from Braden Pears, snapping the puck through Katunar's legs for his 8th goal of the year, which in turn prompted Vees coach Fred Harbinson to turn to backup netminder Nic Renyard.

Trail's fourth goal came shortly after Penticton captain Troy Stecher struck iron on a glorious chance on a Vees power-play. The puck bounced off Todd to Stecher in the right circle. His quick release struck the near post as Todd scrambled across his crease in an attempt to parry the rebound.

Penticton did find the scoreboard in period two, as Brad McClure touched home a deflection of his own for his 14th of the year, cutting Trail's lead to 4-1.

Penticton would decrease the deficit early in the third, when James DeHaas sprung on a rebound and put a puck on goal that rolled up Todd's arm and bounced in. Both teams enjoyed several chances, including an Austin Adduono cross-bar from point-blank range, before Edwards scored his second of the night into the open net in the final minute.

The Smokies had only five defensemen in the lineup, but forced the issue against Penticton's high-powered offense from the get-go. Sam Mellor and Wade Murphy in particular had little time in high-percentage areas thanks to persistent, aggressive back-checking from forwards and strong active sticks from the defense, while Tyler Berkholtz, Chichkin and Poulsen combined for (unofficially) 14 blocked shots.

After backstopping Friday's comeback win, Todd was calm, cool and collected in goal. The 18 year-old showed terrific rebound control and a strong glove hand. The Vees backup Renyard put in a second straight strong performance in relief of Katunar, making key saves on the likes of Berkholtz and Scott Davidson which prevented the Smoke Eaters from putting the game out of reach.

With the victory, the Smokies equal their win total from the 2011-12 season, and move to within three points of the second-place Centennials and Warriors ahead of a key midweek rematch against the Vees.

Up Next: The Smokies visit Penticton Wednesday night at 7:00 to complete the home-and-home series. Of note, this fixture was rescheduled from the original date of February 1st.
Posted by Chris Wahl at 1:22 AM