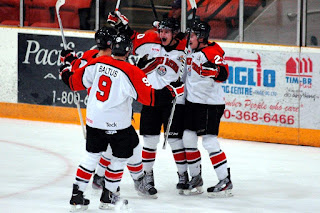 If you like offense, Friday was your night plain and simple.

Valik Chichkin converted a Connor Collett 2-on-1 feed in 3-on-3 overtime as the Smoke Eaters rallied for a wild 8-7 win over Prince George. In a Friday fixture that saw frantic, even manic play for much of the night, it almost made sense that a defenseman ended things on a night when defense was at the very bottom of the menu.

Prince George took the lead 6 and a half minutes into the game, as Jeremiah Luedtke slithered a shot from the right side through an off-kilter Lyndon Stanwood. It was a goal that came against the run of play, as the Smokies enjoyed strong spells of possession in the offensive zone right off the opening faceoff.

Trail would tie things up with 5:29 left to play in the first. Brent Baltus whipped a hard pass from the left corner to the bottom of the right-wing circle to captain Garrett McMullen, who one-timed the puck past Spruce Kings starter Kirk Thompson for his eighth goal of the season.

The two teams would combine for six more goals in the first period alone. Prince George took the lead on a Coltyn Hansen wrist shot before Baltus found the back of the net after deflecting a Shane Poulsen point shot. Less than a minute later, Shayne Morrissey scored the first of his two first-period goals on a laser beam from the right circle that found the top corner of Stanwood's net. Prince George would extend the lead to 4-2 when Tyson Witala backhanded past Stanwood after collecting the puck off Cominco Arena's lively end boards.

But just ten seconds after the Spruce Kings found a two-goal lead, Trail answered back. McMullen converted on a one-timer short-side on Thompson to draw the Smokies back to within one. Morrissey though, restored Prince George's two-goal advantage with 0.9 seconds left on the first-period clock on a seeing-eye slapper from the blueline that fooled a dejected Stanwood, who made way for Adam Todd to start period two.

The second brought just as many chances, but no goals, as the Smokies again found themselves forced into a third period comeback.

This time, Trail was extremely efficient, at least to start. Austin Adduono cut PG's lead to 5-4 in the opening minute, before Connor Collett banged home a rebound at 1:14 to put the Smoke Eaters back on level terms.

But it didn't last long. First Witala on a two-man breakaway, then a Brad Ryan slapper on a rare power-play that saw Todd completely screened, and the Spruce Kings found themselves ahead 7-5 with less than 10 minutes left in regulation.

Again, the Smokies found an answer. 30 seconds after Ryan's goal, Tyler Berkholtz put home a shot that looked to carom off a Prince George defenseman for his first goal since October 2nd. Trail would find yet another equalizer off the stick of Djordje Leposavic with 4:45 left to play, as he pinched in from the right point, collected a pass from Baltus on his backhand, and shoveled the puck past Thompson for his second goal of the season.

The teams traded chances until Chichkin's winner. With two Spruce Kings caught behind the play, Collett raced down the right wing, then feathered a pass across the slot to Chichkin who put the puck between Thompson's outstretched legs for his second goal in as many games.

Trail fired a season-high 51 shots at the opposing goal and looked threatening at all times, outshooting their opponents for only the 7th time in 24 outings. Todd was terrific in relief of Stanwood, earning his second victory as a Smoke Eater. Once again, the top line of Baltus, McMullen and Scott Davidson continues to click too, combining for 8 points while Berkholtz and Collett also enjoyed three-point nights. It's also worth noting that Trail played the game with only five defensemen, with both Braeden Jones and Marley Keca sidelined.

Up Next: The Smokies will gather their emotions and prepare for the Penticton Vees, who make their first visit of the season to Cominco Arena Saturday. Game time is 7:30.
Posted by Chris Wahl at 12:16 AM