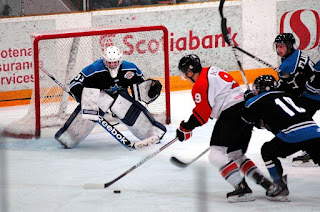 Trail's leading scorer has himself an NCAA Division I commitment, after Brent Baltus verbally agreed to join Alaska-Anchorage.

The 20 year-old Baltus, who has already surpassed a BCHL career-high with 16 goals in the Smokies' first 25 games this season, will suit up for the Seawolves in the fall of 2013.

The official release from the team is available here.

To me, Baltus' commitment is a perfect indication of the value of hard work and dedication., Baltus missed out on training camp last season, joining the Smoke Eaters during the pre-season as a 19 year-old rookie in a primarily checking role, growing more confident offensively as the 2011-12 season wore on (the highlight might well have been a Coastal swing in late January where he tallied goals in three straight games). He won the team's Most Improved Player award at the end-of-year banquet after a 14-goal, 30-point season.

As training camp began this year, it was evident Baltus had put in a ton of work over the summer. He was bigger, stronger and faster on the ice, and looked poised to grab a spot in Trail's top-six. The regular season has seen no slowdown, as his line with captain Garrett McMullen and rookie Scott Davidson has been dangerous just about every night, wearing down opposing teams deep in the offensive zone with persistent cycling and strong puck possession along the low boards.

Off the ice, the Seawolves are getting a bright, polite young man with a strong upbringing. As with many of his teammates, I quite often bump into Baltus' parents in concourses and parking lots in Trail and around the league, all the more impressive considering the 10-or-so hour trip to our neck of the woods from their Nanaimo home.

Congrats "Baltsy," and keep up the great work!
Posted by Chris Wahl at 10:22 AM