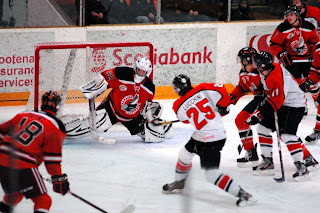 On an orange and black afternoon, it was the visiting Nanaimo Clippers who came away victorious thanks to three second-period goals at Cominco Arena Sunday.

After a first period that saw the home team enjoy an edge in play, the wheels fell off the Smoke Eaters' bus in period two as Nanaimo won its' third straight contest in Trail.

After a comeback fell just short Saturday against Vernon, the Smokies came barrelling out of the gate Sunday, forcing turnovers and creating offensive chances, most notably a shot off the cross-bar midway through the frame from captain Garrett McMullen. A late power-play for Trail may well have woken up the Clippers, whose penalty-kill not only scored, but forced the issue against a poorly-polished Smoke Eater power-play all over the ice.

The Clippers broke onto the scoreboard while short-handed early in the second period. With leading goal-scorer Kyle Kramer in the box for a high-sticking double-minor, forward Brendan Taylor whipped a hard pass from the corner that was redirected in by veteran Greg Fraser. The Clippers' fourth line added to the lead at the 11:38 mark of period two after a centring feed from behind the goalline made its way to AP forward (and former Smokies affiliate) Tanner Burns, who potted his first BCHL goal on his Clippers debut.

Austin Dick rattled home a power-play slapper later in the frame from the right point for his first BCHL marker to extend Nanaimo's lead to 3-0 at the intermission.

Again, the Smoke Eaters started the third period playing desperate hockey, and were rewarded early when Riley McDougall lifted his own rebound over an outstretched Jayson Argue for his first goal since re-joining the Smokies last month. But despite strong Trail pressure, the physical Clippers were able to prevent any further chipping away of their lead, and a Fraser empty-net goal at the final buzzer sealed the Smoke Eaters' fate.

Argue collected his 13th victory of the season, while affiliate goaltender Jordan Gluck looked very strong in his BCHL debut, making 30 saves. Trail's injury woes were exacerbated early in the second period when forward Scott Davidson took a hard hit well away from the play and was forced to leave the game.

Up Next: The Smokies close out 2012 Tuesday night with a home date against the Merritt Centennials (7:30, Cominco Arena). Bring a non-perishable food item to the rink and be entered to win an autographed Smokies jersey!
Posted by Chris Wahl at 8:21 PM