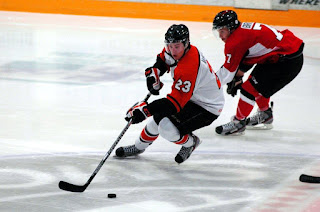 The BCHL announced Tuesday that Smokies captain Garrett McMullen has been named this week's Gongshow Gear Player of the Week, after a 3-goal, 2-first star performance that included more overtime magic last Thursday in Vernon.

The full release from the league is here, the team has more here.

After missing Sunday's win in Chilliwack with the flu, McMullen was back with a vengeance on both nights. He set up Brent Baltus' game-tying goal in Thursday's second period in Vernon before scoring the OT winner, then added a pair of goals (missing out by inches on a hat-trick on a third-period penalty shot) in Trail's come-from-behind victory against Langley Friday. All of a sudden, the captain sits 14th in BCHL scoring with 30 points, and is only 3 goals shy of the 17 he put up last season.

Defenseman Braden Pears is one of five BCHLers granted an honourable mention this week. The 19 year-old set up McMullen's winner Thursday then scored the overtime goal against the Rivermen with a picture-perfect snapper from the right wing. Speaking of all of a sudden, Pears now sits 7th among BCHL defensemen in scoring with 19 points and is riding a five-game point streak, all in the wake of seeing even more minutes than usual thanks to a rash of injuries on the back end.

Pears and McMullen each have two overtime goals to their credit this season too, helping the Smokies to a 6-1 overall record in extra time.

McMullen is the first Smoke Eater to be named Player of the Week since Erik Cooper this past January.

Way to go Garrett and Braden!
Posted by Chris Wahl at 12:38 PM