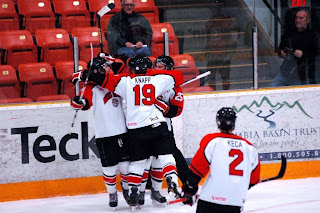 Garrett McMullen's deflection early in the third period proved to be the game-winner as the Smokies closed out 2012 with a physical 4-2 win over Merritt Tuesday at Cominco Arena.

The captain deflected a wrist shot through Merritt goaltender Russell Sanderson's legs for his fifteenth goal of the season to help the Smokies finish the pre-holiday portion of the schedule with an emphatic victory in front of the home faithful.

Trail started out of the blocks with a bang, scoring only 21 seconds into the first period when a point shot was saved by Sanderson, but the rebound caromed off the end boards to an open Riley McDougall, who potted his second goal in as many games.

The Calgary product scored the only goal of a physical first period, with the Smokies playing their most aggressive period of hockey in recent memory, forechecking well and delivering hard body-checks all over the ice.

Trail would take a 2-0 lead just shy of the 12-minute mark of the second period, when Jake Lucchini pounced on a rebound in the left-wing circle and roofed a shot on Sanderson for his fourth goal of the season. The Centennials would reply just over three minutes later, when after a Trail power-play had expired Merritt found themselves on a 3-on-1 rush with only forward Tyler Berkholtz back to defend. A pass from Brent Fletcher across to defenseman Tyler Martin found the back of the net on Smokies starter Lyndon Stanwood.

McMullen's goal would restore the two-goal lead 1:33 into the third, after Austin Adduono wristed a puck toward Sanderson. The Cents would again reply quickly as Martin floated a long shot through the Trail netminder for his second goal of the game. The Centennials came on offensively as the game went on (outshooting Trail 37-32 overall), but Stanwood was strong, with his best saves coming in the latter half of the game.

Adam Wheeldon added some insurance for the Smokies with just less than five minutes left in the period, converting on a rebound for his fourth goal and eleventh point, both new BCHL career-highs.

Trail lost forward Mitch Foyle early in the third period after a heavy check from Centennials defenseman Dylan Chanter, but the 16 year-old returned to the dressing room suffering only from bruising after taking time to recollect himself after a thunderous hit in the neutral zone.

Tonight was easily one of, if not the most complete effort from the Smokies this year, and perhaps a statement game ahead of a long layoff for some weary bodies. It was one of the most physical games (and for the most part clean) that I've seen in some time of watching BCHL hockey, and it's safe to say the Smoke Eaters more than held their own in that department tonight too. With two-thirds of the top line missing from the lineup (Scott Davidson joined Brent Baltus on the sidelines Tuesday) and four other regulars missing through injury, the Smoke Eaters kept things simple, and effective in collecting their tenth home victory of the year. Affiliates Riley Brandt (Beaver Valley) and Jamie Vlanich (Castlegar) were extremely effective in the offensive zone all night, creating several grade-A chances. With such a long layoff (Trail doesn't play again until January 4th), it was important for the Smokies not only to secure two valuable points, but to enter the break on a positive note.

Up Next: The Smokies are idle until Friday, January 4th when they host the Surrey Eagles. 11 of Trail's final 19 games are on home ice, including 7 of the last 9.

Editor's Note: With such a long layoff, things will be getting awfully quiet on the blog for the next couple of weeks. Like the players, I'm heading out of town as well for some family and quiet time. All the best to the fellas, staff, billets, parents, and you, the readers over the holidays and Merry Christmas and a Happy New Year too!
Posted by Chris Wahl at 12:52 AM