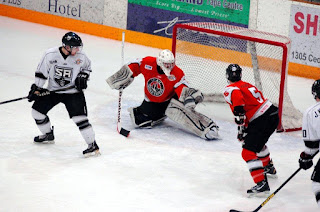 Some great news for Smokies netminder Adam Todd Monday, as he became the latest Trail player to earn an honourable mention for BCHL Player of the Week. The 18 year-old was the goaltender of record in the wins over the Centennials and Vees last week, and was named first star in Wednesday's 2-1 victory over Merritt this past Wednesday.

Todd has been the go-to-guy between the pipes for the better part of a month, as coach Bill Birks has (as he told me pre-game Saturday) been going with the hot hand. And why not. Todd is 8-1 at Cominco Arena, has knocked almost a full goal per game off his GAA in the past 7 weeks, and is a big reason for this club's tenacity in the Interior division playoff race.

From my vantage point too, it almost seems as if the Courtenay product has gotten better since a recent weekend callup to the WHL's Everett Silvertips. Todd didn't play in any of the three games he was dressed for, but surely the experience of getting back to that level (he was a Saskatoon Blade for a stretch of 2011-12) has to have done a lot for his confidence and self-assuredness. (Trail, by the way, is 3-1 since he returned from the Evergreen State).