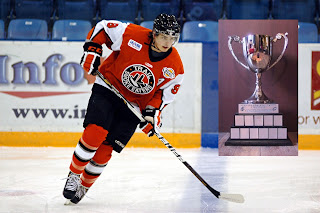 Smoke Eaters forward Brent Baltus has been awarded the Vern Dye Memorial Trophy the 2013 BCHL Interior Conference MVP. This after a 24-goal, 52-point season that saw the Nanaimo product earn a Division I scholarship and establish himself as one of the most dangerous offensive threats in the BC Hockey League. It's an incredible feat for a player who arrived in Trail as a 19 year-old rookie and progressed from the Smokies' third line to top unit at breakneck speed.

Baltus is the first Smoke Eater to win a major BCHL award since Justin St. Louis was named Interior Rookie of the Year in 2004. He is the first Smokie to win this particular trophy too. Overall it's only the eighth time Trail's organization has been awarded a major honour since entering the league in 1995. It's been a memorable season, to say the least, and it's terrific to see Baltus and the Smoke Eaters earn some recognition at a league-wide level.

The full list of 2012-13 award winners was made public this morning and is available here.