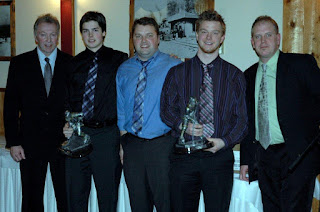 More than 100 people took in Tuesday's Smoke Eaters awards banquet at the Riverbelle in Trail, an event that saw five multiple award winners as the Smokies recognized their players for the hard work they've put in so far this season.

Brent Baltus and Tyler Berkholtz were named co-winners of the Smokies' Most Valuable Player award, while Quinnipiac commit Scott Davidson earned Rookie of the Year honours. Braden Pears was named Top Defenseman while captain Garrett McMullen won the Ed Shelly Memorial award which recognizes hard work, dedication and pride to the Smoke Eater crest and to the community.

Trail's four overage players, Baltus, Berkholtz, McMullen and defenseman Bennett Hambrook were also presented with their white game jerseys from this past season as a keepsake. 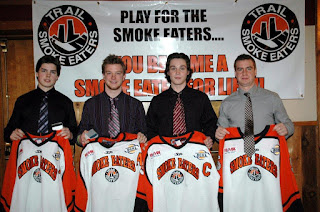 Congrats to each of the players for their hard work and dedication this season, it's been an awful lot of fun watching/traveling/following you guys as this season has progressed. Like every good novel though, it needs an ending, and here's to that ending being as prolonged as possible.
Posted by Chris Wahl at 11:12 PM