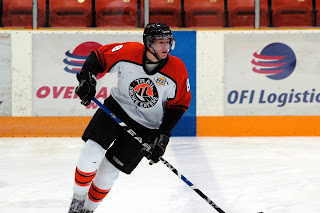 Former Smoke Eaters defenseman Dan DeKeyser cracked an NHL lineup for the first time Friday, making his professional debut with the Detroit Red Wings in Denver against the Colorado Avalanche.

DeKeyser logged a total of 16:36 of ice-time (with 95 seconds on the PK) and was an even plus-minus in Detroit's 3-2 OT win over the Avalanche.

DeKeyser, from Detroit, spent the 2008-09 season in Trail scoring 7 power-play goals and 25 overall points in 58 games with the Smokies. He left for the USHL after one year and following a season with the Sioux City Muskateers developed into one of the top college free-agents during three seasons at Western Michigan University.

Surely, DeKeyser's debut is cause for celebration for the Smokies. He becomes the seventh Junior "A" Smoke Eater (counting four seasons in the late, great RMJHL) to appear in an NHL game, and the first since Brett Skinner played 11 games with the New York Islanders in 2008-09. It's yet another example of how players CAN come to smaller BCHL markets like Trail and move on to the highest levels of hockey.

Congrats Danny, and here's to many more NHL memories!
Posted by Chris Wahl at 8:18 PM