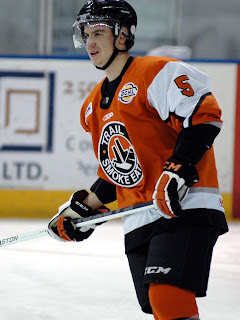 Graduating Smokies defenseman Bennett Hambrook is off to Hamilton College next fall. The 21 year-old will play NCAA Division III hockey for the next four years in upstate New York after a four-year junior career that included three seasons in the BCHL.

Hambrook, from Kimberley, joined the Smokies from Salmon Arm in mid-November (at the time, he was the SilverBacks' captain). Eleven of his eighteen career BCHL points came in the 29 games he played with Trail this season. The ex-Nelson Leaf actually began his BCHL career as a Smokie, making 2 appearances as a call-up in 2009-10.

Hamilton College, which recently placed #16 in the United States in a US News and World Report ranking of national liberal arts colleges, is getting a heck of a player and person. I've never seen the kind of outpouring of well-wishes from players, coaches and staff as I saw from the SilverBacks when the deal to bring Hambrook here was finalized last November; I think everyone within the Smoke Eaters organization understood why rather quickly. Hambrook's heart and determination on the ice, and professional attitude and leadership qualities off it, will continue to serve him well as he continues on to college this fall. I'd expect that he'll be just as good an ambassador for the Continentals as he was with the Smoke Eaters.

Congratulations and all the best "Hammy!"
Posted by Chris Wahl at 3:59 PM