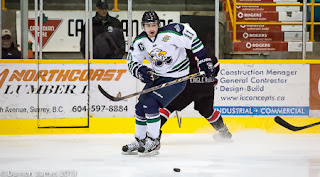 The Eagles go in search of the third seed in the BCHL's Mainland division at Coquitlam Friday. Surrey sits one point behind the Express after a wild 7-5 victory Wednesday that saw three Eagles factor in with multi-goal games.

Danton Heinen led the way with four points, while Nathan Renouf and Joseph Drapluk each added two goals as Surrey closed out its November home schedule with its fourth win in six tries. And with Friday's game being both the Eagles' only fixture this weekend and the final game of the month, no doubt Peter Schaefer's crew will try to continue on the success enjoyed two nights ago at South Surrey Arena.

A win this evening would lift the Eagles past the Express into third place in the Mainland division; Coquitlam enters play one point up on Surrey (26 vs. 25).

Last Meeting: Surrey matched its best offensive output of the campaign in Wednesday's 7-5 win, and recorded its first home-ice win against the Express this season. Coquitlam leads the season series 3-2.

Our Opponent: The Express will be eager to start the weekend off on a positive note and can take stock in a strong third-period comeback that nearly paid off Wednesday. Coquitlam visits the Island Saturday and Sunday and in doing so will burn two of their four games in hand on the Eagles by the end of the weekend. Playmaker Adam Rockwood leads all scorers in the season series with 11 points through five games; both he and captain Ryan Rosenthal put up a goal and an assist two nights ago.

In the Press Box: Veterans Brett Mulcahy and Colton Mackie both missed Wednesday's game; blueliner Ryan Fraser-Lee is out. Newcomer Luke Sandler is eligible to return following a two-game suspension.
Posted by Chris Wahl at 10:41 AM