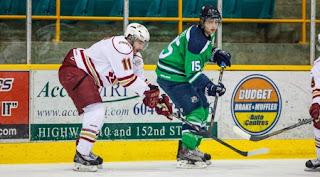 Austin Plevy's power-play goal 2:53 into the third period stood up as the winner as the Chilliwack Chiefs defeated the Eagles 5-3 in Surrey Saturday.

Plevy banked a hard centring pass off an Eagle into the Surrey net to, at the time, give the Chiefs a 4-1 lead as Chilliwack withstood a late charge to earn their third win over Surrey in four tries.

Saturday's game could well have gone the other way, though. The Eagles were rampant in period one, scoring once through Nic Pierog and coming close on a number of other occasions to take a 1-0 lead into the intermission. Goaltender Devon Fordyce had to be strong, too, at the other end notably robbing Plevy on a one-time chance late in the frame.

But the Chiefs used the first intermission to their advantage and found a pair of timely goals early in the second period. First, Jaret Babych snuck a shot into the top corner from close range, then Kurt Black tapped home a rebound effort just over a minute later.

After both Pierog and Philippe Johansson hit posts, the Chiefs found a third goal from Blake Gober 1:44 before the end of period two, when the Chilliwack forward stole a puck inside the Surrey line and danced to the front of the net, beating Fordyce with a forehand effort.

Plevy's goal added to the Chiefs lead early in period three before Braeden Russell got the Eagles back on the board just shy of the ten-minute mark.

Chilliwack's Tanner Cochrane converted a Plevy feed with just under four minutes left to restore the Chiefs' 3-goal lead, until Surrey's Mitch Fyffe rounded out the scoring with a snapper over goaltender Spencer Tremblay's shoulder from close range.

The loss was Surrey's first at home since November 11th and snapped a three-game winning streak. Chilliwack earned their second successive victory, and Tremblay his first win in goal in over a month.

Up Next: The two sides meet again Sunday evening in Chilliwack. Game time is 5:00 pm at Prospera Centre.
Posted by Chris Wahl at 12:21 AM